We all know that the brain is the most crucial organ in the body and has essential functions. For this reason, it is essential to strengthen the brain and keep it in good condition by consuming healthy foods. Some foods are suitable for the brain and help it function better. At the same time, some other foods have adverse effects on the brain and increase the risk of dementia.

During the colder months of the year, the body clock may be out of balance due to decreased natural light. This can make it difficult to sleep at night and therefore reduce your energy during the day. Research shows that chamomile tea not only helps you sleep better but can also improve your cognitive function while being beneficial and helping to strengthen your brain.

Black beans are not only a cheap source of protein but also high in magnesium and folate. Researchers have reported that magnesium can improve cognitive function and memory. Beans are suitable for the heart. This means better blood flow and, therefore, a healthier brain.

Older people suffer from vitamin D deficiency, which causes a faster cognitive decline. People deficient in vitamin D can make up for it by eating certain foods, such as eggs, which contain this vitamin.

Almonds are rich in vitamin E, which research has shown helps reduce the risk of cognitive impairment.

Replacing peanut butter with almond butter can be an excellent way to deal with age-related memory loss. Almonds are rich in vitamin E, which research has shown helps reduce the risk of cognitive impairment. Almonds contain three times more vitamin E than peanuts.

Some studies have shown that vitamin E can also reduce the rate of dementia caused by Alzheimer’s disease. You can eat almonds as a snack to help strengthen your brain.

Excess belly fat not only damages your back but also puts pressure on your brain. Abdominal fat causes plaque in the coronary arteries and blocks the arteries that feed the brain, leading to Alzheimer’s.

Avocados contain healthy fats that help eliminate belly fat and clear blood vessels. One study found that participants who ate half a fresh avocado for lunch were 40 hours less likely to eat for several hours.

DHA, an omega-3 fatty acid in fatty fish such as salmon, can improve memory. In one study, researchers examined the effects of DHA supplements on adults who consumed small amounts of omega-3 fatty acids in their diets. The results showed that adding just 1.73 grams of omega-3 foods (like salmon) made a big difference.

If you keep forgetting the name of the person you met, do not forget to eat broccoli. This nutrient is rich in vitamin K, which has been shown to improve verbal memory. This memory is our ability to absorb and recall oral structures.

Cherry tomatoes (and other bright red and orange) are a great source of a nutrient called carotenoids that appear to improve cognitive function and memory over time. One of the most vital types of these nutrients is lycopene, found in large amounts in tomatoes’ skin.

Lycopene protects you from the inflammation caused by depression, so foods that contain it can improve your mood. Cherry tomatoes have more lycopene in the skin than regular tomatoes.

An animal study showed that flavonoids in blueberries improve spatial memory in rats. The antioxidants in blueberries help reduce inflammation and strengthen the brain. Inflammation leads to long-term problems with the brain and memory function. Add this delicious fruit to the smoothie to benefit its properties for the brain.

Beets contain betaine, which helps increase the secretion of the hormone serotonin. This hormone helps to stabilize the mood. Beets also contain folic acid, which promotes emotional and mental health.

In a published study, participants were divided into two groups. One group drank a beverage containing green tea extract and the other a liquid containing a placebo containing placebo. A series of experiments were performed on participants.

This study showed that people who drank a drink containing green tea extract experienced an increase in cognitive function. The researchers concluded that green tea might be proper in treating mental disorders such as psychiatric disorders.

Walnuts are one of the best nuts for health and strengthen the brain because they contain many omega-3 fatty acids. One study found that eating walnuts can improve memory and cognitive function in people aged 20 to 59. According to this study, people who eat walnuts every day have better cognitive tests than other people.

One study showed that turmeric could prevent and improve the symptoms of Alzheimer’s disease and dementia. It can also help treat traumatic brain injury.

Turmeric is the right spice for flavoring food as well as strengthening the brain. One study showed that turmeric could prevent and improve the symptoms of Alzheimer’s disease and dementia. It can also help treat traumatic brain injury. Turmeric is a beneficial nutrient for the brain due to its anti-inflammatory effects on the body.

There are conflicting opinions about coconut oil because it contains saturated fats. However, this oil is not only used for skin and hair but can also be used to improve brain strengthening.

According to one study, coconut oil contains significant amounts of medium-chain triglycerides converted to ketones in the body. Ketones are used as fuel for brain cells.

The worst food for the brain

Some foods can cause dementia. To help keep your mind young and healthy, eliminate the foods listed below from your diet.

Excessive consumption of sugary drinks increases the risk of type 2 diabetes, which has increased Alzheimer’s disease. Also, high blood sugar can increase the risk of dementia, even in people without diabetes.

High intake of fructose (a type of fruit sugar) can lead to overweight, high blood pressure, hyperlipidemia, and diabetes. Studies show that high fructose intake may have adverse effects on the brain.

Refined carbohydrates include sugars and highly processed grains such as white flour. These types of carbohydrates usually have a high glycemic index. This means that your body digests them quickly, which leads to a sudden rise in blood sugar and insulin levels. If you consume a lot of these carbohydrates, your brain will fail.

A study showed that people who consume more refined fats and sugars have more flawed memory. This may be due to inflammation of the hippocampus, which is part of the brain and affects some aspects of memory. Inflammation is a risk factor for problems such as Alzheimer’s and dementia.

Carbohydrates may have other effects on the brain. For example, one study found that children ages 6 to 7 who consumed more refined carbohydrates performed worse on nonverbal memory tests.

Harmful donuts for the brain

Donuts contain two substances that are dangerous for the brain: sugar and saturated fat. An average donut can have more than 12 grams of sugar and 7 grams of saturated fat, both of which play an essential role in reducing cognitive function. So to help strengthen the brain, avoid eating this food.

It is better to avoid drinking water. Because as mentioned above, fruit juice has a lot of sugar that is harmful to the brain. One study found that sugary drinks could dramatically reduce cognitive function and alter short-term memory. Researchers believe that sugar disrupts beneficial bacteria in the heart and intestines in the microbiome, which hurts cognitive function.

Carbohydrate-rich foods such as white rice have been shown to hurt mental health. One study found that foods high in the glycemic index could increase the risk of depression in postmenopausal women. The study also found that women who consumed more lactose, fiber, and vegetables experienced a significant reduction in depressive symptoms.

According to one study, foods such as fried foods that clog arteries can increase the risk of Alzheimer’s disease and reduced cognitive function.

One of the worst foods for the brain is fried foods like fried potatoes. According to one study, foods such as fried foods that clog arteries can increase the risk of Alzheimer’s disease and reduced cognitive function. Researchers attribute this to the high cholesterol in fried foods. 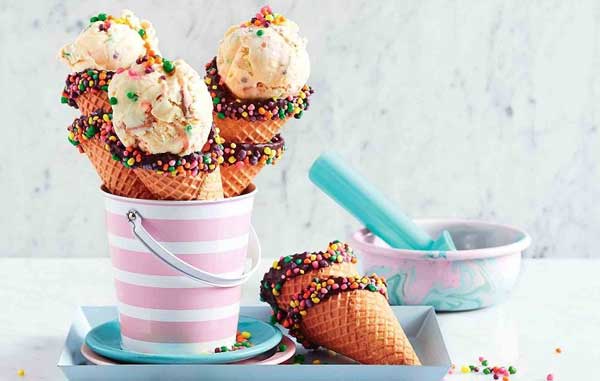 Ice cream contains sugar and fat. Several studies have shown that foods high in sugar and fat can impair cognitive skills and verbal memory. Instead of ice cream, eat Greek yogurt with blueberries or strawberries to strengthen your brain. These two fruits are associated with slowing down dementia.

There is nothing wrong with using tiny amounts of soy sauce in some foods, such as sushi, but one tablespoon of it contains 40% of the recommended daily allowance of salt. High-salt foods hurt the brain. According to one study, high blood pressure is usually the result of eating large amounts of salt and sodium-rich foods such as soy sauce.

This can restrict blood flow to the brain and negatively reduce concentration, organizational skills, and memory. Excessive salt intake can also lead to electrolyte imbalances and dehydration, both of which are harmful to the brain.

The American Heart Association recommends eating fatty fish such as salmon at least once a week. By doing this, you help your heart health and strengthen your mind. But you should note that high consumption of fish, especially fish that have large amounts of mercury, is harmful to the brain.

You may think that vegetable oils are good for your health. But we have to tell you that some oils, such as sunflower oil, soybean oil, and canola oil, have more omega-6s than other oils. This type of fatty acid can lead to inflammation of the brain. Instead, use oils such as olive oil, which contain omega-3 fatty acids.

11 causes of excessive sweating and 15 ways to treat it

22 Healthy and tonic food for building muscle without increasing fat

23 Foods and Drinks You Should Never Eat After Exercise