Drinking herbal teas can help alleviate some of the symptoms of irritable bowel syndrome (IBS). The practice of drinking tea is generally relaxing and soothing. Anxiety and stress can be reduced by drinking tea. Physically, these teas can relieve cramps and relax abdominal muscles. In order to introduce the best tea for irritable bowel syndrome, let’s briefly discuss this disease and its symptoms.

The symptoms of Irritable Bowel Syndrome are as follows:

The disease of irritable bowel syndrome is not considered very dangerous, but if it is not treated properly, it can cause a lot of abdominal discomfort. It can cause stomach cramps, bloating, diarrhea, and even long-term constipation. Recurrence periods of irritable bowel syndrome vary in length. After some time, its symptoms affect the patient and then disappear. Like a cycle, this movement continues. Symptoms of this disease include:

Behavior change in the bowels
After defecating, there is a feeling of not emptying the bowels
Bloating and swelling in the abdomen
A feeling of pain and cramping in the abdominal area (pain reduction during feces)
Stools containing white mucus
Urgent and sudden need to go to the bathroom

These symptoms have not been successfully treated with long-term medical treatments. Changes to diet and lifestyle are recommended to alleviate these symptoms, such as exercising regularly, eating a variety of fresh foods, reducing stress, and drinking the best tea for irritable bowel syndrome. 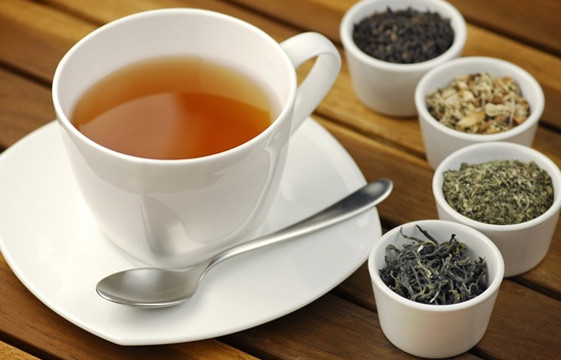 Replace your usual cup of tea with a cup of fresh herbal tea, and you have taken a huge step towards improving and caring for your health. Irritable bowel syndrome symptoms are triggered by caffeine in carbonated soft drinks, tea and coffee. By irritating the intestines, these liquids can cause recurrence of the disease.

You can increase your energy level by drinking water and hydrating your body if you have trouble removing caffeine and feel lethargic and tired without it. Make sure you carry a large bottle of herbal syrup. Regularly drink this syrup to hydrate your body.

Milk is often added to tea and coffee drinks. Diarrhea is known to be triggered by lactose in milk. The symptoms of this disease can be eliminated by removing it and drinking herbal teas. To find the best tea for irritable bowel syndrome, we will explain the types of tea suitable for these people.

We’re talking about anise here, which is often confused with star anise or even fennel. Its mild flavor, shared with fennel and star anise, may explain this mistake. The roots, leaves, and seeds of this plant are used to produce medicine and even to perfume soap.

Anise may be safe to consume based on research, but if you are allergic to asparagus, cumin, celery, coriander, dill, and fennel, you may also be allergic to anise. If you have an underlying medical condition, you might want to try another herbal remedy instead of anise. Anyone with a history of hormone-sensitive conditions such as breast cancer, uterine cancer, ovarian cancer, endometriosis, or uterine fibroids should avoid anise.

When using anise, you should be aware that it has a very strong taste. You can add crushed anise seeds to your herbal tea and brew. If you want a milder taste, reduce the amount of anise by half. 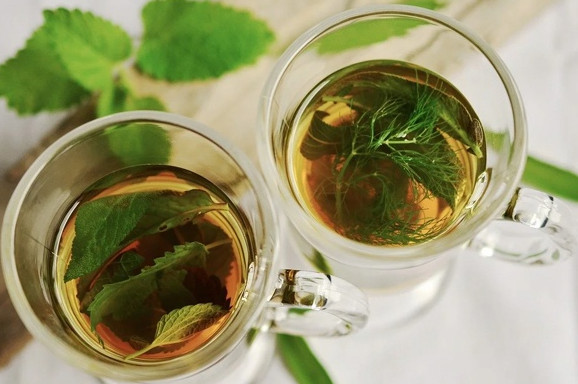 The best tea for irritable bowel syndrome has a taste and aroma similar to apple, but it is much milder. The use of chamomile as a herbal tea has a long history. It is the chamomile flowers that provide the flavor. The leaves of chamomile are bitter and harsh. The leaves can be added to herbal tea brews, but we recommend using more flowers.

A 2010 study showed that chamomile inhibited Helicobacter pylori, a bacteria associated with stomach ulcers. Chamomile may also reduce stomach cramps, according to some research. The combination of myrrh, coffee charcoal, and chamomile flower extract reduced the symptoms of acute diarrhea in another study published in 2014.

Studies have not reported many side effects of chamomile so far. If you develop hives or severe skin irritation after taking chamomile, you should seek medical attention immediately. Drinking chamomile tea can cause drowsiness, and it should be avoided before driving and performing tasks that require full alertness.

For one cup of herbal tea, use 8 fresh or dried chamomile flowers. Let the chamomile steep for 10 to 20 minutes, depending on how strong you like your tea’s flavor.

The best tea for irritable bowel syndrome is fennel. Fennel has a taste similar to anise or licorice. Herbal teas can be prepared with fennel seeds or leaves.

Fennel consumption has been shown to significantly reduce symptoms of irritable bowel syndrome and improve quality of life in 121 patients with the disease. When turmeric and fennel extracts were combined, these results were obtained. People with irritable bowel syndrome can significantly reduce cramping and diarrhea with fennel’s antispasmodic properties. In addition, fennel has a sedative effect, which is useful for reducing stress.

Consult your doctor before drinking fennel tea if you have an underlying medical condition as it may interact with certain medications. Fennel essential oil and tea should not be consumed by pregnant women.

For each cup of tea, use 2 tablespoons of crushed fennel seeds. Fennel is best steeped in boiling water for 10 minutes to treat irritable bowel syndrome. Fresh fennel leaves can be used in the summer months to achieve a milder taste, especially when combined with fresh chamomile flowers or turmeric extract.

Ginger has a strong, spicy taste. When using this plant as an infusion, it should be taken into account that it has a very hot nature. In herbal teas, ginger adds a lot of flavor.

Efficacy of ginger for irritable bowel syndrome has not been scientifically proven. In spite of this, there is a lot of evidence that drinking ginger tea can reduce the symptoms of this illness. Much milder than caffeine, ginger reduces inflammation and facilitates bowel movement.

People who take ginger may experience heartburn, diarrhea, wind, and general stomach upset. Ginger should not be used as an herbal tea if this happens.

Prepare a cup of tea with a thinly sliced piece of fresh ginger root, 2-3 cm long. Put this amount in boiling water and let it steep for 10 minutes.

Lavender tea tastes sweet and fragrant. If you want a stronger lavender taste, you need to brew a lot of it.

It works by calming the body and mind. Despite little research on its effects, it also acts as an antispasmodic in the gut.

Since little research has been done on lavender, there is not enough information about its side effects. During pregnancy and breastfeeding, lavender herbal tea should be avoided. If you are having surgery in the next few days or have just been discharged from the hospital, you should avoid lavender since it slows down the central nervous system.

The best way to use lavender is to combine it with other herbal teas and then consume. Mint and lavender, for example, create a tasty and useful combination. Put a teaspoon of lavender and 5 teaspoons of mint in boiling water for 5 to 10 minutes. Irritable bowel syndrome can be treated with this combination of herbs. 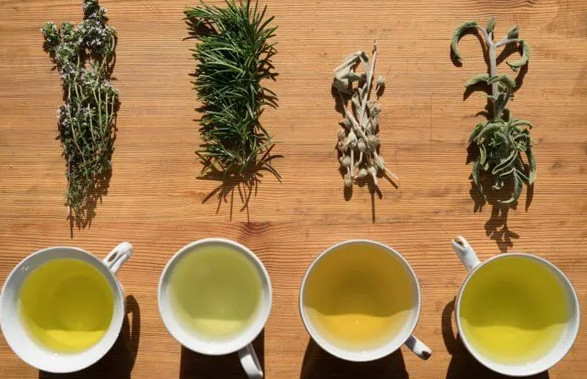 Herbal tea made from nettles:

Known as the earthy version of seaweed, nettles taste like earth. There is a sweetness to the taste of this plant that reminds me of a sweeter type of seaweed.

Constipation and diarrhea are reduced by nettle tea. As a result of its digestive system-regulating properties, it has this property. While little modern research has been done on nettle tea, traditional and ancient medicine have paid a lot of attention to it. The nettle plant has been used since 3000 BC.

Nettle tea should not be consumed by pregnant or lactating women.

For a sweeter taste, choose larger and older nettle leaves. Tea plants should have more leaves and fewer stems. In a teapot, place 1 tablespoon of chopped nettle leaves. After 5 to 10 minutes, let it brew. To get a more tasty and tonic result, combine nettle with other medicinal plants.

It is recommended that you consult your doctor before using peppermint herbal tea to treat symptoms of irritable bowel syndrome, especially if you have an underlying medical condition.

Put about 15 large mint leaves in a teapot and steep. Let it brew for 10 minutes with a cup of boiled water. This tea is usually drunk cold with fresh lemon juice added.

Turmeric tea alone may not appeal to everyone. There is a bitter taste to this drink. This plant is therefore recommended to be made into tea along with herbs such as fennel and anise.

Turmeric contains curcumin, which acts as an antispasmodic to reduce stomach cramps. This issue has been confirmed by a series of studies in this field. Irritable bowel syndrome symptoms are significantly reduced when this tea is combined with fennel.

Turmeric has a higher level of side effects than other herbal teas, perhaps because of the amount of research done on it. Clinical trials have reported constipation, indigestion, diarrhea, gastroesophageal reflux, nausea, vomiting, yellowing of stool, and stomach pain. There may be a cause-and-effect loop between all of these and irritable bowel syndrome.

Mixing turmeric with other herbs is always a good idea, as mentioned above. Turmeric, ginger, and lemon make a classic tea recipe for irritable bowel syndrome. It gives excellent results when combined with 3 teaspoons of ground turmeric, 1 teaspoon of fresh ginger, and the peel and juice of a lemon. Steep this mixture in boiling water for 5 to 10 minutes, depending on your preference.