A laboratory study published in the Journal of Agricultural and Food Chemistry in 2012 showed that cinnamon extract facilitates the synthesis of collagen in the skin, but the results have not been confirmed in humans, although collagen is the most abundant component in the skin. The extracellular tissue, in which collagen is an important protein, maintains the structure and multiple functions of the skin, retaining water, maintaining its firmness, and maintaining its smoothness. 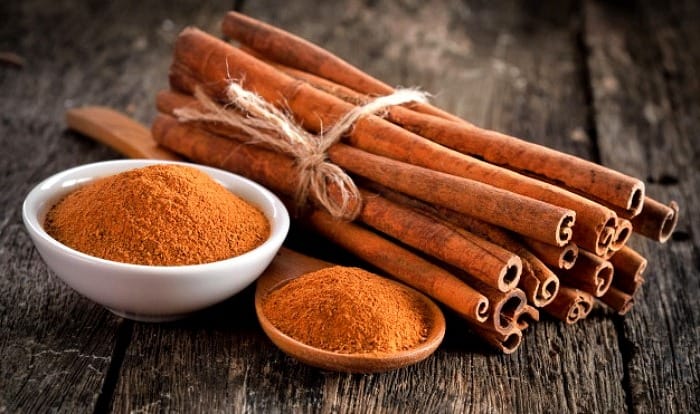 According to a laboratory study published in 2013, cinnamon oil may be helpful in reducing acne. As compared to other oils, cinnamon oil was the most effective in reducing pimples. Cinnamon extract has been shown in laboratory studies to reduce acne-causing bacteria, but these results have not been confirmed in humans, and more research is needed. In general, cinnamon has anti-inflammatory and antibacterial properties that help to get rid of pimples.

Cinnamon or its oil may be safe to use directly on the skin. Due to its potential to cause redness, itching, and burns on the skin, it is better not to apply cinnamon directly to the skin. Instead, eat it and benefit from its benefits.

There are many antioxidants in cinnamon. Compounds such as polyphenols help reduce oxidative damage caused by free radicals, which are harmful substances. In addition to vitamin A, calcium, magnesium, iron, phosphorus, and potassium, there are also small amounts of vitamin B and vitamin K.

Cinnamon amount that can be consumed

Cinnamon consumption depends on a number of factors. To date, there is not enough scientific evidence to determine the right amount of cinnamon bark, and natural products are not always safe regardless of the person’s age, health status, and other factors. Consult your pharmacist, medical professional, or other health care professional before using these products to determine their dosage.

Cinnamon or its oil should not be applied directly to the skin, as it may cause some side effects, such as skin burning.

When taken orally, cinnamon is potentially unsafe when consumed in excess, and it is important to avoid eating large quantities of cinnamon during pregnancy and breastfeeding.

Cinnamon has the following contraindications:

Cinnamon does not appear to harm the skin, but the following should be used with caution:

Type 2 diabetes patients may experience a decrease in blood sugar levels if they consume the bark of the cinnamon tree. Therefore, you should watch for low blood sugar indicators and control your blood sugar level carefully if using the bark.

If you have surgery: Cinnamon may affect blood sugar levels, making it more difficult to control levels during and after surgery, so stop using cinnamon at least two weeks before your surgery.