Our article discusses some drinks that can help relieve period pain, especially around the abdomen, back, and thighs:

It’s recommended to keep a water bottle handy during your period, and you can add mint leaves to taste. Drinking enough water and staying hydrated may not directly alleviate cramping, but it can reduce bloating that worsens cramps. 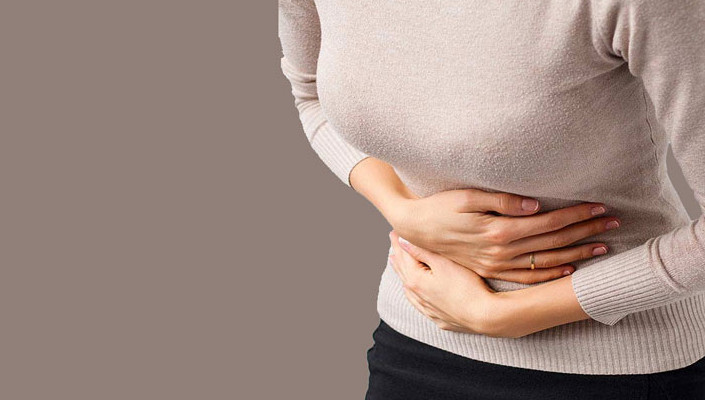 According to a 2009 study in the Journal of Alternative and Complementary Medicine, ginger may be helpful for relieving menstrual cramps because of its pain-relieving and relaxing properties. For 3 days, they took capsules containing 250 mg of ginger powder four times a day, which reduced the symptoms of dysmenorrhea. An article published in the Journal of Herbal Research in 2014 found that ginger helps reduce heavy menstrual bleeding.

There is still a need to conduct more research on ginger’s effects on other symptoms associated with dysmenorrhea, the safety of dosages consumed, and the period during which it can be present in order to confirm the effect of ginger on the menstrual cycle. It can be used and it is worth noting that there is not enough information about the safety of ginger consumption during breastfeeding, so it is recommended not to consume ginger during this period, as well as ginger consumption not recommended for people with bleeding disorders. An increased risk of bleeding may be associated with this brand.

A study published in the Journal of Complementary Therapies in Medicine in 2015 found that curcumin has a beneficial effect on menstrual cycle symptoms. As well as its anti-inflammatory properties, curcumin reduces symptoms of dysmenorrhea by modulating neurotransmitters.

People with bleeding disorders, such as people with diabetes, may suffer from turmeric‘s ability to slow blood clotting. Turmeric contains curcumin, which may lower blood sugar levels, so it is recommended to be cautious when taking it.

Studies have shown that consuming fennel seeds during menstruation calms the body. According to a study published in the International Quarterly Journal of Ayurvedic Research in 2012, Fennel is effective for girls and women between the ages of 15 and 24.

During breastfeeding, fennel tea may not be safe to consume. Fennel can damage infants’ nervous systems and slow down the blood clotting process, increasing their risk of bleeding. This is due to its damage to the nervous system in infants.

A study published in the Iranian Red Crescent Medical Journal in 2015 found that cinnamon can reduce menstrual cycle symptoms. It is also beneficial for those suffering from dysmenorrhoea without causing complications, such as reducing bleeding, pain, nausea, and vomiting.

Cassia cinnamon is potentially unsafe when taken orally in large amounts for an extended period of time. Cassia cinnamon contains high levels of coumarin, which can cause liver disease or worsen it in people with allergies due to its potential side effects.

There is not enough information about the safety of cinnamon consumption during breastfeeding, so it is recommended to avoid it. When cinnamon is consumed in excess of what is found in food, monitor blood sugar levels.

According to a study published in the Journal of Medical Sciences Research in 2014, taking 1,000 milligrams of dill powder for 5 days reduced menstrual pain in 75 women between 18 and 28. The effect is similar to that of mefenamic acid in relieving dysmenorrhoea pain, but more research is needed to understand its side effects.

There is not enough information about the safety of its consumption during breastfeeding, so it is recommended to avoid its consumption. It can also cause allergic reactions in people who are allergic to carrot plants.

The herb chamomile is recommended to drink during menstruation. A study published in Iranian Journal of Obstetrics and Gynecology in 2010 showed that daily consumption of two cups of chamomile tea during menstruation for a period of three months helps to reduce the pain caused by dysmenorrhea, along with the psychological and social problems caused by these pains.

PMS symptoms can be relieved by many foods, but some foods may worsen them and cause bloating or inflammation. We mention the following foods among these:

Caffeine consumption may worsen cramps associated with dysmenorrhea, so women should avoid caffeinated beverages. During and before menstruation, coffee is a good choice. Soft drinks, energy drinks, chocolate, and tea should also be avoided during this period, and instead, vegetable juice should be consumed.

Taking oral caffeine for a long time or in high doses of more than 400 mg per day may not be safe. Caffeine consumption during breastfeeding may cause nervousness, insomnia, stomach irritation, nausea, vomiting, increased heart rate and breathing, and other side effects. Nursing mothers and people with bleeding disorders should consume it in small amounts as it may pass into breast milk. Caffeine may aggravate the problem, so consume it with caution.

During the menstrual cycle, women should avoid saturated fats.

Foods that are highly processed

White bread and pasta are baked with white flour.

To help relieve period pain, here are some nutritional tips:

It is important to eat more leafy vegetables of different colors to get nutrients. These include cabbage, turnip leaves, or Swiss chard, which are all rich in iron and B vitamins, which can relieve fatigue and tiredness by mixing some vegetables with olive oil and adding chopped herbs.

Calcium and low-fat dairy consumption: Taking calcium supplements during premenstrual period is one of the ways to reduce mood disorders, since calcium in the diet helps to reduce symptoms related to dysmenorrhea.

Many foods contain vitamin D naturally. PMS symptoms can be reduced by increasing vitamin D intake, such as through sardines, oysters, and salmon.

There are many other tips that can be followed to relieve period pain. The following are included: