Since cast iron dishes do not react negatively to food, they are considered good dishes. Suppose the use of cast-iron dishes increases the number of iron ions in the food consumed, and given that iron deficiency is widespread. In that case, these dishes can even Be more useful. But it should be noted that:

2- These dishes are heavy and not easy to use.

3- Many containers called cast-iron containers are compressed aluminum that is made by casting. This process increases the strength and the volumetric mass and thus makes these containers heavier (relative to aluminum rather than cast iron). These dishes can not be found without coating or glaze and often have a Teflon coating, which does not cause a problem if these dishes have steel glaze.

4- One of the ways to detect the cast iron of the container is that the magnet sticks to them and breaks to the ground if it falls with great force or from a great height. 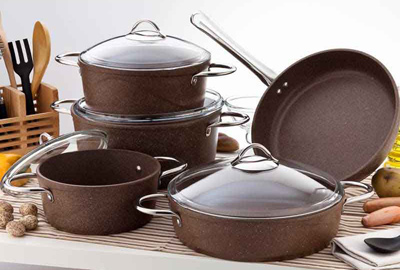 5- In new cast-iron dishes, a kind of ceramic coating is used. According to the current information, such non-stick plates, while having the advantages of cast-iron words, do not have the disadvantages of Teflon dishes. The high price of these dishes is one of the negative aspects of using them.

6- To reduce the undesirable exchanges of uncoated cast irons with food, their inner surface should be lightly oiled and placed on the stove for two hours for the first time.

7- Before using the main cast iron dishes without coating, you should put them on the heat for a few minutes to warm them up. To make sure the pan is hot enough, you can pour a drop of water into it, and if it evaporates quickly, it means the pan is hot.

9- Use the cloud to wash Teflon-coated cast irons because the dishwasher wire will scratch and damage them.

Wash the cast iron pot with a soft cloth and dishwashing liquid (never use coarse wire or sponge as the potting layers of the pool will be damaged) and then lubricate it with oil and material.

Cast iron (which is a combination of iron and carbon) has a long life. These dishes are suitable for long cooking at medium to high temperatures, and if they do not have aluminum, they are a good option for cooking. These pots distribute heat evenly and are very suitable for frying, cooking, or even placing in the oven due to their high-temperature resistance.

Of course, you should know that most of the pots sold in the market today under the name of cast iron pots are not cast iron but are made of dry aluminum, which is injected into the mold with special devices and Teflon or molds. Ceramics are painted on them. These counterfeit pots are not challenging to detect and, unlike accurate cast irons, which are very heavy, they weigh little. A sizeable cast-iron pan weighs about four kilograms.

You must first put them on the heat for a few minutes before use. To make sure it is warm enough, you can pour a drop of water into it, and if it evaporates quickly, it means the dish is hot. If cast iron dishes are heated first, the food will not stick to them. Second, in a cast-iron container that has not yet been used, water should not be left for a long time because it will rust.

Third, use a cloud to wash the cast iron because the dishwasher wire will scratch and damage it, and fourth, remove the food from the cast-iron dishes after cooking so that it does not oxidize. Also, do not pour acidic substances such as lemon juice or tomato sauce into uncoated cast-iron containers.

If your cast-iron case is original:

There are two types of cast-iron dishes. In some of them, cast iron metal is used for construction, and a non-stick layer is used, making this model better quality and much more durable. These dishes retain heat without releasing toxic substances and become very hot to quickly grill all kinds of meat and chicken without cooking oil and grill different foods.

These dishes can be safely used for daily cooking because the food is healthy. Of course, some cast-iron plates are not even laminated and are made entirely of cast iron, and the Teflon or non-stick layer is not stretched inside. These dishes have a good structure and are suitable for cooking.

The second model has cast-iron dishes with a structure similar to Teflon, but only their inner layer is cast iron and a non-stick coating. Their system is identical to Teflon, only they last longer, and the non-stick layer disappears later.

Do rusty cast-iron dishes cause them to break down?

No, if you see rust in your cast iron pan or pot, use the dishwasher wire to remove the layer formed on the pan’s surface and repeat the steps of making cast iron pots.

For added convenience, you can use relatively strong detergents to remove the orange layer without much effort. But it would help if you made sure that these types of detergents are not toxic so that the surface of the container does not absorb hazardous substances.

Food is cooked in pans with less oil

A skinny layer of oil covering the entire surface of the dish is all you need to cook food in cast iron pots, so you can save on oil consumption and eliminate the potential dangers of high-fat foods. Take

If you do not allow enough time to heat the cast iron pots and pour the raw materials into the container immediately after lighting, the chances of burning parts of the food will increase.

For this reason, many users preheat cast iron pots well before cooking to heat the dishes fully because the thermal conductivity of cast-iron plates is very low compared to aluminum and copper dishes.

Cast iron utensils are easy to store and care for

Cast iron utensils are pretty prominent in rigorous physical tests, and the effect of other metal utensils, especially metal knives, is having no adverse impact on their bodies. And do not worry about losing the oil coating and consequently its non-stick surface.

On the other hand, cast iron pots can go underwater if they are hot, and unlike other non-stick containers in such conditions, they do not lose their quality. When washing cast-iron dishes, you can also use detergents and quickly go through the steps of washing a cast iron dish or cast iron pot.