Causes of non-harmful bruising on the skin

Sudden bruising of the foot or other parts of the body caused by minor trauma or injury can cause bruising and discoloration of the skin. Some people quickly and due to a seemingly insignificant blow, their skin and body become bruised, and black or blue spots appear on their body.

Sometimes bruising without injury can be a sign of a severe problem. This section will introduce the causes of sudden bruising on the legs and other parts of the body and get rid of them quickly. 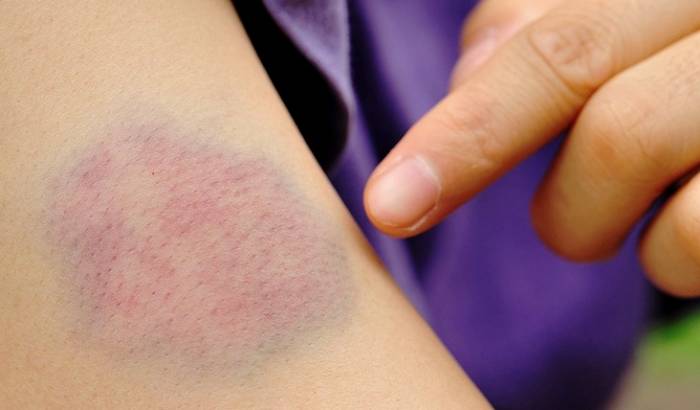 Spontaneous bruising for no apparent reason is very rare. People who are prone to bruising may not remember the cause of minor injuries. Discoloration of the skin due to a sudden rupture of blood vessels is the result of a bruise.

This causes bleeding from the arteries and capillaries to collect near the skin’s surface, first appearing as black or blue spots and turning green or yellow with healing.

These bruises may seem painful at first, but they itch with healing. Complete repair of these bruises takes between one to two weeks.

What are the causes of sudden and unexplained bruising in the body?

Knowing the cause of these bruises can prevent them from occurring in the future and diagnose whether it is necessary to see a doctor.

Bruising in the elderly is caused by skin changes and decreased collagen levels. Aging creates a thin layer of protective fat on the skin, meaning that older people are more prone to bruising than younger people. 90% of bruises are seen on the legs and arms and rarely on the feet’ neck, ears, buttocks, or soles.

One of the causes of bruising is vitamin deficiency. For example, Vitamin C deficiency causes unexplained bruising and bleeding. Vitamin K plays a vital role in blood clotting. Vitamin C is reported to help strengthen blood vessels and prevent them from rupturing.

Taking certain medications and supplements can thin the blood vessels. According to doctors, taking aspirin, some anticoagulants, and antibiotics can cause blood clotting problems.

Also, take supplements such as ginkgo Biloba, ginger, and turmeric, which have blood-thinning properties and easily cause bruising. For this reason, the use of these supplements should not be permanent, and ginger should be used with caution in the use of slimming drugs.

Sometimes there is a sudden bruising on the body due to hereditary factors. Women are more exposed to men because of their smaller veins.

Bleeding disorders cause sudden bruising in the body for no apparent reason. For example, people with hemophilia and Willebrand have this problem. According to the National Hemophilia Foundation, in addition to bleeding and bruising disorders, infected people may experience unexplained nosebleeds and prolonged bleeding from cuts and scratches. Women with hemophilia will also have heavy menstrual bleeding.

Sunlight is needed to get vitamin D, but overexposure to the sun can damage the skin. The effects of sunburn take longer to heal and may even be lasting. If you have abnormal bleeding with sunburn, see your doctor for a checkup.

Some of the symptoms of sunburn, such as redness, scaling, and itching, can be treated with natural remedies such as aloe vera, honey, hazelnut extract, and oats.

Doing heavy exercises such as weightlifting and strenuous exercise can cause sudden bruising of the skin. Fractures of runners’ toenails are also a significant cause of bruising because they are placed in front of shoes when running and placing toes.

If you are in such a situation, you can do this treatment: 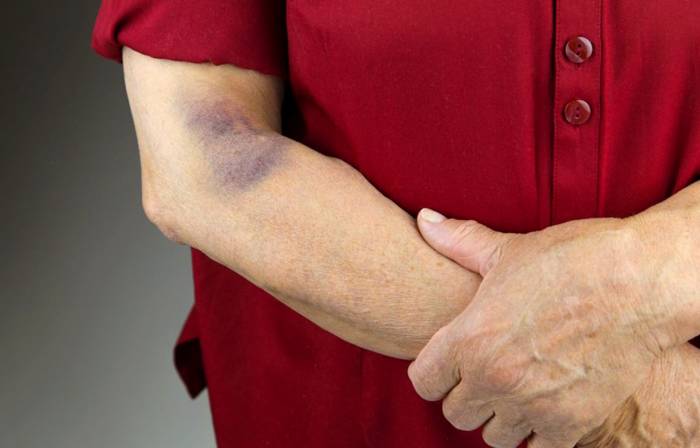 Sudden bruising of the legs is one of the symptoms of advanced diabetes. This disease affects the blood vessels and leads to peripheral vascular disease. In addition to sudden bruising in diabetics, increased thirst and urination, weight loss, nausea, and abdominal pain are also observed.

The peripheral vascular disease usually affects the legs. Bruising in diabetes is one of the injuries that does not heal.

Viral infections cause a disease called thrombocytopenia, which affects blood clotting. Some common viral infections include chickenpox, mumps, and rubella.

Other medical problems, such as AIDS, aplastic anemia, and leukemia, can also affect platelets and cause bleeding.

Autoimmune disorders occur when the body produces antibodies against its tissues instead of fighting infections, some of which include:

Liver disease: When the liver does not make the blood clots, this disease occurs, which in addition to sudden bruising on the skin, swelling of the legs, and bleeding from the intestines are also symptoms of this disease.

Kidney disease: Sudden bruising is sometimes a symptom of the secondary stages of chronic kidney disease. A person with this disease will experience drowsiness, numbness of the hands and feet, bad breath, blood in the stool, and vomiting in the morning.

Some specific cancer treatments affect platelets. According to the National Cancer Institute, chemotherapy can cause sudden bruising and red or purple spots on the skin.

Sudden bruising on the breast does not go away and will be a sign of breast cancer. Other symptoms of inflammatory breast cancer include sore breasts, swollen breasts, nipple deformities, and discharge.

Another type of cancer that causes sudden bruising is leukemia. A person with this cancer can experience various symptoms, including weight loss, persistent fatigue, recurrent infections, or unexplained bleeding. However, in rare cases, sudden bruising can be a sign of a severe illness.

Some tea bruises can be treated naturally with tea bags and aloe vera.

When should I see a doctor?

The effects of bruising usually go away after two weeks, but if you have these symptoms with bruising, you should see your doctor:

The bruising did not go away after two weeks.

For no apparent reason, you may notice bruising on your legs or other parts of your body.