Green tea and coffee are two useful and popular drinks among people that are used in different ways.

After water, tea is the most widely consumed beverage globally, and coffee is trendy. In the United States, more than 85 percent of adults regularly consume caffeine, about 180 milligrams a day, which is about the equivalent of two cups of coffee. People consume coffee and green tea because of their taste and health. This article will examine the advantages and disadvantages of coffee and green tea and healthy methods of preparing them. 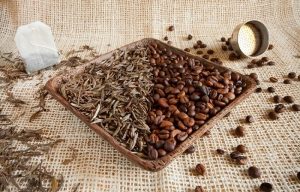 Evidence also shows that caffeine has protective effects on brain health and reduces the risk of dementia and other degenerative diseases. Some studies have even linked caffeine consumption to a reduced risk of developing type 2 diabetes. But research into the link between caffeine and diabetes seems futile because more evidence suggests it may raise blood sugar levels, and scientists need to do more research into the possible effects of caffeine.

Green tea and coffee have several common health benefits, the most important of which are their high antioxidant content and weight loss effects.

Free radicals play several important roles in the body. But too much of them can lead to oxidative stress. Oxidative stress is a harmful process that can negatively affect your health by causing disease and accelerating the aging process. Fortunately, coffee and green tea are full of antioxidants, and both are rich in a group of antioxidants called polyphenols.

Epigallocatechin gallate (EGCG) and chlorogenic acid (CGA) are the most abundant polyphenols in green tea and coffee. The results of various studies and experiments on humans and animals have shown that these substances may have strong anti-cancer effects. For example, EGCG can prevent tumor growth and spread and may lead to tumor cell death, which is surprising. Keep in mind that the anti-inflammatory effect of this substance can help prevent chronic inflammation in cancer, and on the other hand, CGA seems to prevent tumor growth and kill cancer cells.

Studies show that EGCG in green tea can kill cancer cells in head and neck tumors and cancer cells in the lung, prostate, breast, colon, and pancreas. In contrast, the CGA in coffee may benefit liver, endometrial, and skin cancers. In addition, CGA can help regulate heart health and control blood sugar by regulating blood triglyceride levels and improving the cell’s response to insulin.

The CGA and EGCG in green tea and coffee can help you lose weight. Animal studies show that CGA may lower insulin, blood cholesterol, and triglycerides in the blood. It may also lower leptin levels (the hormone that regulates hunger), which leads to weight loss. Visceral fat is fat stored in the abdomen and limbs associated with an increased risk of heart disease and diabetes. Similarly, animal studies show that EGCG leads to weight loss and visceral fat loss by reducing fat breakdown. It also promotes the growth of beneficial bacteria in the gut, which helps burn fat and improve insulin sensitivity. In addition, studies have shown that caffeine is associated with weight loss and appears to be associated with the following symptoms:

L-theanine is an amino acid found naturally in some types of tea, including green tea. This compound affects the human brain and increases the feeling of relaxation. The results of various studies show that drinking green tea increases the alpha wave of the brain in people, indicating a calm and alert state of mind.

The relationship between green tea and coffee consumption with a reduction in some diseases: Coffee and tea are two beneficial and effective drinks for the body. But their consumption may also have negative effects on human health. For example, additives such as sweeteners, creams, and flavored syrups may significantly increase the calories and sugar in your coffee or tea. Research shows that drinking coffee and sweet tea can lead to high sugar intake in adults, a condition associated with weight gain, type 2 diabetes, heart disease, and cavities. On the other hand, even if caffeine is considered a useful substance. But too much can lead to unwanted side effects such as caffeine anxiety and sleep disorders.

Evidence suggests that excessive caffeine consumption may lead to increased alertness and anxiety. If taken in doses above 400 mg per day, it can worsen anxiety, panic disorder, and insomnia. In addition, caffeine use may lead to caffeine dependence in some people. Caffeine addicts may continue to consume caffeine despite experiencing harmful effects. There is evidence that oils in coffee, including caffeine and aging, can raise blood cholesterol levels. Analysis of various studies shows that consumption of coffee made without paper filters is associated with increased total cholesterol and LDL (bad) in the blood. But researchers found that when drinking coffee made from paper filters.

Coffee and green tea can have several health benefits. But the way they are prepared can make the difference between a nutritious or low-nutrient drink.

To brew a cup of healthy coffee or green tea, keep these tips in mind:

Green tea and coffee are the two main beverages in many people’s diets. Due to their caffeine and antioxidant properties, they have many health benefits, the most important of which are anti-cancer and weight loss effects. If these drinks are combined with additives such as sugar, cream, and flavored syrups, they negatively affect health. Considering the higher levels of caffeine in coffee and the L-theanine in green tea may help you choose your coffee or green tea.