In multiple sclerosis or MS, the immune system attacks myelin, a substance that surrounds and insulates nerve fibers, causing myelin loss and nerve damage. Because the exact antigen or target of the attack is unknown, many experts refer to it as an attack by the immune system rather than a mere autoimmune disease.
Sclerosis means abnormal hardening or thickening of the tissue, often caused by inflammation. The progression of MS is often slow over several years (about 25 years). MS is two to three times more common in women than men. Most people with MS have an average life expectancy, and those who are not treated may also have movement disorders.
However, people with severely progressive illnesses may suffer from injuries such as pneumonia.

The first signs of MS appear between the ages of 20 and 40. Although MS is more common in children or people over the age of 40, it is generally much less common in these age groups. Only about 2 to 5 percent of people with MS before 18 have symptoms that do not appear to be due to genetic factors. 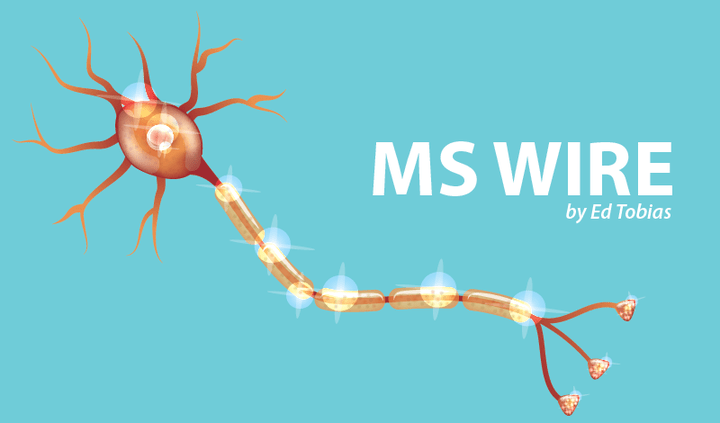 This form of the disease is diagnosed when the problems caused by an attack do not entirely disappear during remission. This condition often occurs in patients who were first diagnosed with RRMS. Progressive weakness is observed in patients over time.

This form of the disease progresses over time and has no remission or improvement in symptoms. 10% of MS cases are of this type.

In this form of the disease, the patient has symptoms of increasing exacerbation over time, and between these periods of exacerbation, intermittent periods of recovery are observed. This is the rarest condition and accounts for 5% of diagnoses.

What are the causes of MS?

The exact cause of MS has not yet been determined. There are many theories about the causes of MS. These theories range from vitamin D deficiency to viral infections. Even excessive salt consumption has been suggested as one of the factors. However, none of these theories have been proven so far, and the cause of MS remains unknown. The disease is not contagious and is not transmitted from person to person. 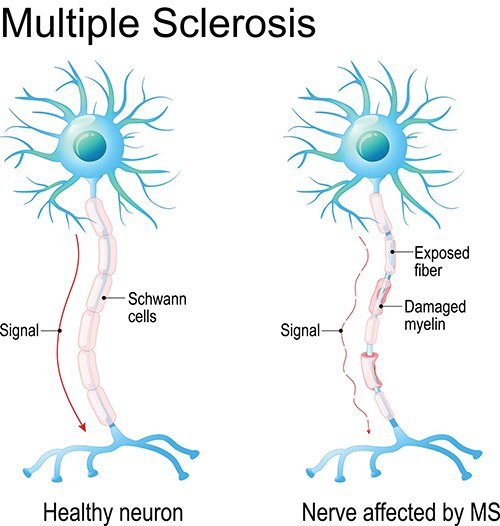 Because this autoimmune inflammation can attack myelin axons almost anywhere in the central nervous system, each attack’s location and severity can vary. As a result, the MS symptoms can be quite different in patients and can be seen anywhere in the body.
The first common symptom is a change in sensory perception, people with MS often suffer from intermittent seizures with periods of symptom relief, and MS attacks can last for months and then improve. However, the disease may continue to get worse in some people without periods of recovery.

In MS, immune system cells attack the nervous system. It can occur in the brain, spinal cord, or optic nerves. As a result, MS patients have symptoms associated with muscle disorders such as muscle spasms, numbness, balance and coordination problems, difficulty moving arms and legs, difficulty walking, and weakness or tremors in one or both legs or arms. To be

Eye disorders, vision loss (usually starting in one eye), double nose, involuntary eye movements, optic neuritis (inflammation of the optic nerve), more general eye disorders, blurred vision, pain when moving the eye. These symptoms are caused by damage to the brain that is responsible for controlling and coordinating vision.

Anesthesia, tremor, or pain are common in patients with MS. Most patients experience these symptoms throughout the body or in a specific area, and the patient may feel a tingling or burning sensation.
According to one study, more than half of people with MS experience pain during their illness. The most common pain types that people with MS experience are headaches, back pain, and muscle spasms associated with pain. Because nerves cause these pains, common painkillers such as aspirin have little effect on them. Other symptoms include facial pain and impulsive movements of the facial muscles. While some types of pain are directly related to MS, other forms of pain may be due to the type of disease that affects the body. For example, an imbalance caused by a walking disorder can cause pain due to pressure on the body’s joints.

Incomplete or hasty speech, lack of voice control, slowness of speech, and speech quality changes such as hoarseness are some of the problems associated with telepathy that this disease can cause.

MS also makes it difficult to chew food. These injuries also impair the body’s ability to transport food through the esophagus and stomach.

The effects of the disease on the brain and nerves

Decreased range of accuracy, memory loss, poor judgment, inadequate response or problem-solving ability, depression (both as a result of damage to areas of the brain that control emotions and as a result of stress caused by the disease itself), mood swings, balance problems These include dizziness, hearing loss, inability to concentrate, and dementia

Decreased libido, decreased sensitivity of the genitals, decreased number and intensity of the orgasm process; also, women will experience dry genitals and pain during intercourse.

Specific symptoms of MS in women

Living in a sunny environment can reduce the risk of MS.

Symptoms of MS, which mainly affect women, appear to be related to hormone levels. Some researchers believe that lower levels of testosterone are essential. Others say that fluctuations in women’s hormone levels affect the symptoms of the disease. The main symptoms that affect women include menstrual problems, pregnancy-related symptoms, and menopause.

Studies have shown that in some women, MS symptoms worsen during menstruation. This may be due to a decrease in estrogen levels during that time. Symptoms included weakness, imbalance, depression, and fatigue.

Pregnancy does not appear to accelerate or exacerbate the effects of MS. Some studies show that MS symptoms decrease during pregnancy and increase after delivery. The debilitating effects of the disease may physically challenge pregnancy tolerance. Muscle weakness and coordination problems can increase the risk of miscarriage. Of course, there is no evidence that MS causes infertility.

During pregnancy, it is necessary to have complete control over the disease process and the fetus’s health. Supportive and rehabilitative treatments are essential for MS during pregnancy. During labor, the patient may feel numbness in the pelvic area and not feel pain during contractions. This is a problem in determining the time of onset of labor. If a person has MS, labor becomes a little more complicated. MS can affect the muscles and nerves that need to be pressed and need a cesarean or assistive device. 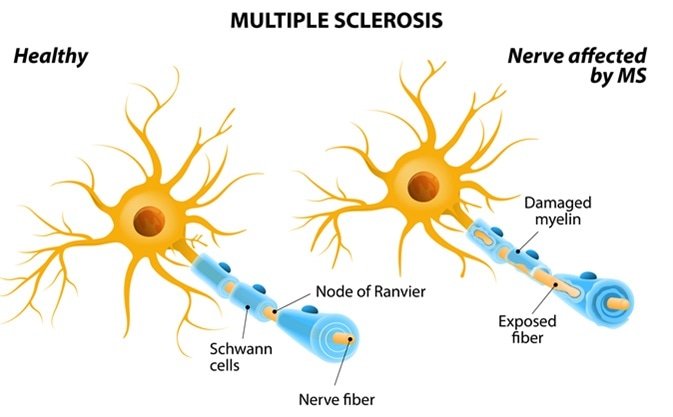 Some studies have shown that in some women, the symptoms of MS worsen after menopause. This may be due to lower levels of estrogen after menopause.
Although hormone replacement therapy (HRT) helps reduce these symptoms in postmenopausal women, the treatment itself is associated with an increased risk of breast cancer, heart disease, and stroke.

What are the MS tests and diagnostic tests?

The first common symptom of MS is a change in sensory perception anywhere in the body.

Medical imaging technology also helps diagnose the disease. The most common test is an MRI. CT scans, which are useful in identifying brain injuries, cannot accurately show MS-related MRI changes. Spinal cord fluid may also be sampled. Tests are performed on this fluid to confirm the presence of protein and inflammatory markers. However, with routine use of MRI, a cerebrospinal fluid biopsy is not mandatory; Unless there are any suspicious findings on MRI that need to be tested further. Electrical tests are also performed to check the rate of transmission of nerve impulses.

What are the treatment guidelines for MS symptoms?

Although the mechanism behind the onset of MS and its recurrence is unknown, the effects of several drugs in patients have been identified.

Interferon drugs: Interferon drugs (Avonex, Betaseron, Ecstavia, Rabif, Pellegrid) should be given to the patient during one injection. The frequency of injections ranges from a few days to a week. In some patients, flu-like symptoms or skin bumps may develop after each injection; Symptoms of severe depression may also occur in some patients.

Natalizumab (Tysabri): Natalizumab is a monoclonal antibody, and its effect on patients with relapsing-remitting form has been confirmed. Due to severe side effects, including the risk of severe brain infection, it is recommended for patients who have not responded to other interferon products or whose disease is very active.

Mitoxantrone (Novantrone): Mitoxantrone is a chemotherapy drug for leukemia or prostate cancer and is useful in the treatment of secondary progressive, progressive-relapsing, and recurrent-recessive MS.

Feingold (Gillenia): This medicine can cause heart problems.

Teriflunomide (Adagio): One of the side effects of this drug is severe liver injury. 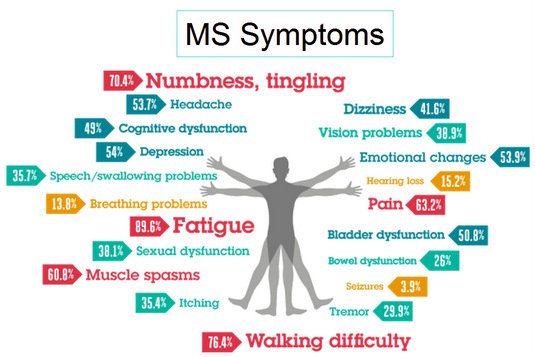 In general, these drugs often have side effects and are usually prescribed by experienced doctors to treat MS patients. Plasmapheresis (a way to remove antibodies from a patient’s bloodstream) is another way to reduce autoimmune problems in some people with MS.
The US Food and Drug Administration (FDA) has recently approved Acros acrylic to treat adult patients with the primary progressive form (PPMS). This is the first FDA-approved drug for this type of MS to be prescribed.

Without a clear definition of MS’s causes, ways to prevent the disease will not be identified. Regular exercise, getting enough sleep, or eating healthy foods have long-term benefits for everyone; But it has not been shown to help prevent this disease’s development.

What doctors and specialists treat MS?

What research is being done on MS?

Several studies have shown that destroying the immune system using chemotherapy and then replacing it with immune stem cells taken from the patient’s blood can prevent the spread of new damage.
This treatment seems to have restarted the immune system so that it no longer attacks the brain. This strategy is being tested in clinical trials.
Other research is investigating the possibility of treating MS with bone marrow-derived stem cells. 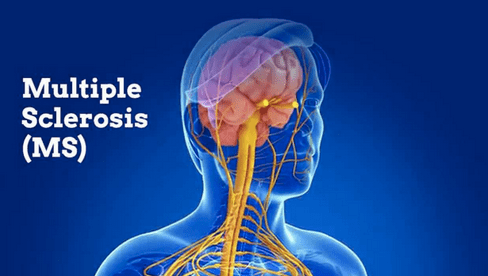 Eating fish may reduce the risk of MS.

Researchers are investigating whether symptoms that do not respond to FDA-approved immunomodulatory therapies could be due to impaired cell mitochondria. Researchers are also developing methods to help brain cells produce new myelin to strengthen or repair damaged cells in the brain and spinal cord.

Some experimental drugs in the laboratory protect brain cells from dying or help brain cells produce new myelin. However, to test these drugs as human therapies, researchers need accurate biomarkers to measure the rate of death and repair of nerve cells and their re-myelination. Researchers are also trying to identify biomarkers that can help doctors determine if a particular patient responds to treatment or, ideally, choosing the right medication for each person with MS.

Researchers are also developing advanced animal models in which MS conditions are very similar to humans. In animal models currently available, the condition of MS is not fully simulated and has many mechanisms in common with MS symptoms. Accordingly, drugs that respond well to animal models often fail miserably in human clinical trials. Having a more accurate animal model reduces the cost and time of medical tests that may not affect human disease.