After a severe physical blow to the face, dark spots appear around the eyes and turn black. This disorder often occurs when fluid collects under the tissues around the eye and changes color with swelling, and rupture of blood vessels in the skin around the eye is the leading cause of this dullness.

What is a black eye, and what can I do?

Dark blue and bruises on the tissue around the eyes are called black eyes because tiny capillaries or blood vessels have ruptured and leaked under the skin.

As the fluid builds up around the eyes, bruising, swelling, and puffiness occur, making it difficult to open the eyes, and vision may be temporarily blurred. There may be pain around the eyes and possibly headaches.

Any bleeding inside the eye also needs medical attention, as it can cause eye damage, which can lead to vision problems.

When a person is hit in the face, blackness and bruising occur around the eyes, such as a ball, a fist, a door, or something else.

Dark circles around the eyes can also occur after some dental or cosmetic surgery types, and bruising can last for several days.

It was bruising around both eyes, known as a raccoon eye, maybe a skull fracture, or another type of head injury that requires immediate medical attention.

Effects and signs of dark circles around the eyes:

If the area around a person’s eye is damaged, you will probably notice swelling.

As the swelling spreads, the skin color changes. It will be red first, then gradually change to dark blue, dark purple, and possibly black.

Sometimes there is a red spot on the eye, indicating blocked bleeding heals after 2 to 3 weeks.

Over days, the swelling decreases and changes color, and the dark colors gradually fade from dark blue, purple, or black to yellowish-green after a few days.

Visual problems such as blurred vision may occur.

The bumps around the eyes usually disappear within 1 to 2 weeks and do not require medical attention. 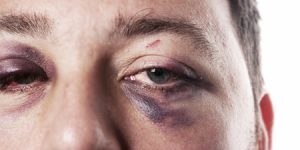 You should see a doctor if there is blood in the eyes of a severe headache.

Black eye and dark circles around the eyes usually improve without medical intervention but can sometimes be a sign of seriousness, in which case medical attention may be needed. The biggest concern about any head injury is the uncertainty of the skull fracture, hematomas in essential structures such as the eyes, and bleeding or swelling in the brain.

Several symptoms may indicate the presence of these complications.

If the following occurs, the person needs immediate medical attention:

Home remedies for a black look:

Things not to do: 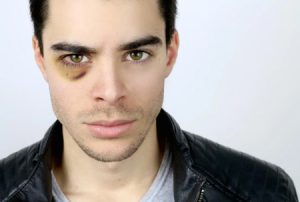 Note: No evidence placing raw meat on an eye bruise can help improve it because raw meat contains bacteria that should not contact the eye’s mucous membrane.

Your doctor will usually prescribe home remedies such as ice and acetaminophen.

If they suspect a more severe injury, such as a facial bone fracture, they will refer the person to a specialist.