Fish is a useful food that is one of the main and basic ingredients of people’s diet. Fish has a very high nutritional value and has the most useful and essential nutrients only for humans.

Fish is a good source of iron, and iron plays an important role in blood formation and maintains the body’s resistance to germs. Iron in fish is such that it is easily absorbed in the digestive tract and is well consumed in the body. In addition, iron in fish increases iron absorption from plant sources, which plays an important role in preventing iron deficiency anemia.

Fish is an important part of a healthy diet due to its protein and omega-3 fatty acids and plays an important role in preventing cardiovascular disease. Therefore, everyone in the community, especially women and children, should include fish in their diet because of its many nutritional benefits.

But sometimes, we read and hear about mercury in fish and the risk of poisoning. Today we want to provide brief information in this regard to “fish” lovers. The taste of shark and swordfish is unique, especially when grilled. But reports suggest that these fish and much other larger fish with a longer lifespan may contain excess methylmercury (1 ppm), which has discouraged fish fans.

However, experts say that these fish are safe in a balanced diet with low consumption and rarely (up to once a week).

Almost all fish have very little mercury, but there is no problem in consuming fish and mercury for most people in the community.

Mercury is naturally present in the environment. According to the Food and Drug Administration (FDA), approximately 6,000-2,700 tons of mercury are released into the atmosphere annually from the surface of the earth and the oceans. In addition, as a result of human activities and mainly household and industrial waste, especially fossil fuels such as coal, another 2000-2000 tons of mercury are added to the atmosphere annually.

How does mercury enter the body of a fish?

Mercury dissolves very little in water and is chemically converted to methylmercury by bacteria, a more toxic form of mercury. Methylmercury is usually easily absorbed and excreted slowly after entering the stomach.

When water passes through the gills of fish, methylmercury is absorbed by the fish, and the fish feed on aquatic organisms and plankton. Larger fish that feed on smaller fish have higher levels of methylmercury.

Methylmercury in the body of the fish creates a strong connection with muscles and other tissues. The cooking process has little effect on reducing the amount of methylmercury.

Almost all fish contain small amounts of methylmercury, although some have higher levels. Mercury levels rise dramatically in areas with industrial mercury pollution (such as petrochemical wastewater).

How much mercury is allowed in fish?

According to the FDA, the maximum permissible amount of methylmercury in fish is one ppm, much less than the rate of disease in humans.

Risks of excessive accumulation of mercury in the body:

Excessive accumulation of mercury in the body disrupts the nervous system and eventually leads to numbness and itching of the fingers, toes, and lips. It also causes children to start talking and walking later than scheduled. Other side effects include joint and muscle pain and an increased risk of a heart attack.

During the fetal period, the fetus is more vulnerable to the toxic effects of high levels of methylmercury due to the rapid growth of the nervous system. Methylmercury passes easily through the placenta, and the concentration of mercury in fetal red blood cells is 30% higher than in the mother’s blood. Methylmercury has destructive effects on fetal growth, which is 5 to 10 times more harmful than adults.

There is no need to worry about consuming regular fish such as salmon and shrimp, where methylmercury is less than 0.2 ppm.

If you are one of those people who are interested in fishing yourself, try not to fish in polluted waters as much as possible.

Fish that instinctively feed on streams – like catfish – carry more pollutants into their stomachs. 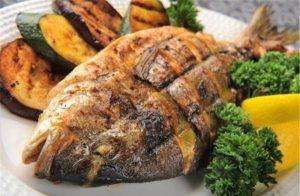 Despite all this, fish is useful:

Providing information should not cause people to avoid this valuable food, but the goal is to inform people about the right choice of fish and its proper consumption.

In general, in all living things, contaminants penetrate and accumulate in different ways. This is true not only of aquatic animals and even of animals but also of plants.

Scientific studies show that heavy metals are higher in the tissues of organisms that exist in areas around certain industries, such as battery factories or paper mills. On the one hand, there is the issue of exposing aquatic animals to substances, and on the other hand, there is the permissible amount of these substances.

Given the above cases and studies, the risk of heavy metals in our country’s aquatic metals is not currently threatening, or at least in studies so far; this issue has not been proven.