If you look closely, you will see women who do not get along with each other, and there is always a constant internal competition between them, but sometimes they are not aware of this competition. In this section, we will introduce you to the reasons why women compete with each other.

Lack of knowledge of desires and feelings

Women do very well in their work, they are great, and they do everything in the best way, but what could be the reason for them to compete with each other? This competition between women can not identify their inner desires, feelings, and goals and lead them to reality. 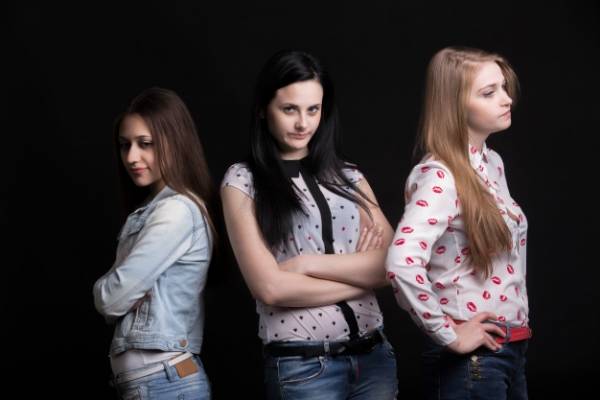 What is the reason for women’s competition?

The reason women compete or hate each other can be related to men. Women compete for the attention of men, and this increases their value or self-esteem. But why do women look each other in the eye to get men?

Many women in society are judged by characteristics that are not under their control, such as appearance, what they did not create. That is why women’s success is based on the external and personal evaluations of others.

She does not know how to beat her rival. They try to have more beautiful clothes and limbs to look more beautiful. Women believe that if they are more physically attractive, they are superior to other women, so they can attract the man they want with their beauty and not let their rival take this man out of their grasp.

Keep the relationship under control

In relationships between men and women, men are always less powerful. Women think that if that beautiful woman wants her partner, the man will be with her. Women believe that men cannot resist a woman’s skill because of their undeniable love, loyalty, and respect for mentally and physically committed relationships. If a man does not want to have a relationship with a woman, it is because the woman controls the relationship. has done.

Change the criteria of beauty.

Unfortunately, many films and advertisements have given a unique shape to women’s beliefs. Such social networks that offer a particular definition of beauty make women compete with each other. If a woman does not betray her husband, she does not blame him and blames herself for not having beauty standards set by others. For example, if you are overweight and want to better your health and self-esteem, but you lose weight for the sake of another woman, or a love rival, the woman’s mind is molded with the assumption that in order to obtain their spouse’s love and loyalty, they must adopt a unique form. It is not just cooking, spouse support, housekeeping, and having children that matter.

It has been seen that in many cases of infidelity, the man has a relationship with his wife’s best friend, family, or neighbor. Because, unfortunately, women attract men because of competition with each other.

Why do women hate each other?

Women think that a young and beautiful woman can easily replace her, and their perfection is limited.

Women think other women can control their husbands’ fidelity.

Women think that men are attracted to their beauty, and other women can get their husbands by using their beauty in work, school, and the legal system.

Women no longer consider women trustworthy and consider them rumors, very deceptive, that they intend to kidnap their husbands in front of their eyes.

Women compete with other women for more psychological attractiveness.

Women think that if they are like a woman who thinks she is successful, they can have her life, wealth, and husband, and others look at her with the same admiration.

Others’ perceptions of a woman’s worth influence her inner and spiritual awareness of her worth as a human being. Women compete in a roundabout way because they haven’t learned how to express their needs, sentiments, and ambitions. Know your inner workings and lead them to the truth.

You can not control what people think of you, so when you accept who you are and how you should live, you do not control the thoughts of others; you are free and will no longer compete with anyone, so whatever you are looking for is for others and characteristics. Strengthen the good you know in yourself, so believe and know your positive and unique qualities, because this way you will not allow yourself to compete with other women, and others will always respect you.