The nervous system is the body’s internal communication system. There are many nerve cells in this system. Information is received by nerve cells through the body’s senses: touch, taste, smell, sight, and hearing. These sensory signals are interpreted by the brain to determine what is going on inside and outside the body. 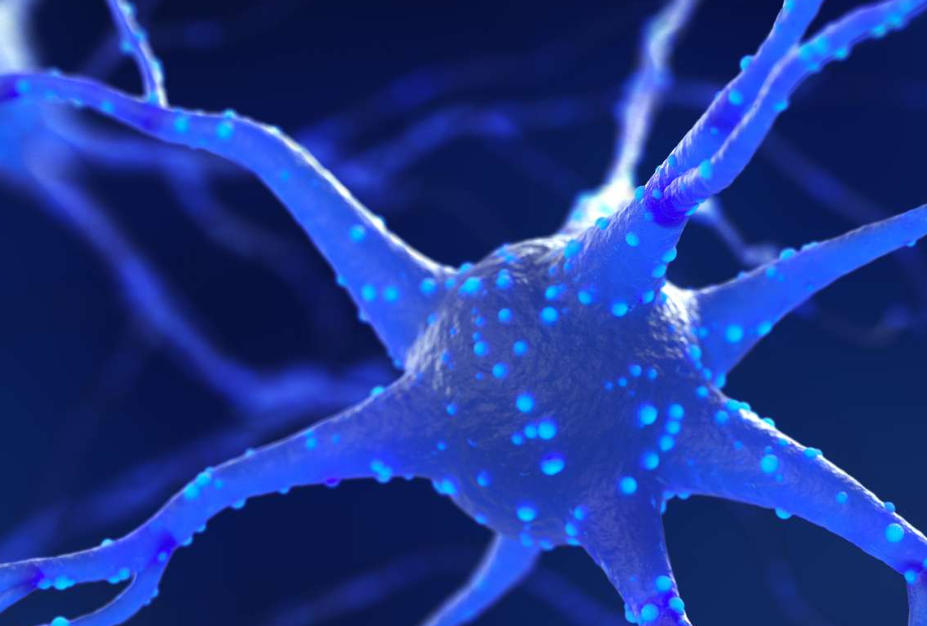 Throughout your body, nerve cells transmit and receive electrical signals to their target cells through an extensive network of nerves. Functions controlled by the nervous system include:

Sympathetic nervous system signals the body to prepare for physical and mental activity. As a result of this system, the heart beats harder and faster, and the airways are opened for easier breathing. In addition, the system temporarily stops digestion to allow the body to focus on quick action. When a person is at rest, the parasympathetic nervous system controls body functions. It stimulates digestion, activates metabolism, and relaxes the body, among other things.

Only the intestines are controlled by the body’s nervous system. During digestion, the enteric nervous system regulates bowel movements automatically.

Neurons: what are they?

The brain sends and receives signals through neurons. Neurons have many similarities with other types of cells, but their structure and function are unique.

The human body contains billions of nerve cells (neurons). There are about 86 billion neurons in the brain and 13.5 million in the spinal cord. The neurons receive electrical and chemical signals and transmit them to other neurons. About 10% of the brain is made up of neurons. Neurons are supported and nourished by glial cells and astrocytes.

Neurogenesis is the process of producing new nerve cells. Although neurogenesis is still poorly understood, we know that it is much more active during embryogenesis. Despite this, a 2013 study found that some neurogenesis occurs in the adult brain as well.

Neurons transmit electrical and chemical signals to other cells through special projections called axons. Dendrites, which resemble roots, can also receive these signals.

How does a neuron work?

Depending on their role and location, neurons have different shapes, sizes, and structures. Almost all neurons have three basic parts: a cell body, an axon, and a dendrite.

Neuron cell body : The neuron cell body is the central part of the neuron, which contains genetic information, maintains the neuron’s structure, and provides energy for its activities. A neuron’s cell body contains a nucleus and specialized organelles. A membrane surrounds the cell body and allows it to interact with its environment while protecting it.

Axons are long, tail-like structures that are connected to the cell body at a junction called an “axon stack”. Myelin is a fatty substance that insulates many axons. Axons conduct electrical signals with the help of myelin. There is usually one main axon per neuron. One meter is the maximum length of an axon.

A dendrite is a root-like structure that branches from the cell body. The dendrites receive and process signals from other neurons’ axons. It is possible for neurons to have more than one set of dendrites, called a “dendritic tree”.

A neuron’s role determines the number of dendritic trees. The cerebellum, for example, contains Purkinje cells, a special type of neuron. Thousands of signals can be received by these cells thanks to their highly developed dendritic trees.

The axon and dendrites of multipolar neurons are symmetrical. In the central nervous system, this type of neuron is the most abundant.

Invertebrates have unipolar neurons, which have a single axon.

In bipolar neurons, two sequences extend from the cell body. Axons are on one side and dendrites are on the other. Neurons of this type are mostly found in the retina, but they are also present in parts of the nervous system that function the nose and ears.

Neurons with pyramidal shapes have an axon and several dendrites. Located mostly in the cerebral cortex, pyramidal neurons are the largest nerve cells. Conscious thoughts are processed in the cortex of the brain.

Functions of different types of neurons

You can taste, smell, hear, see, and feel your surroundings through your sensory neurons.

Voluntary and involuntary movements are controlled by motor neurons. The brain and spinal cord communicate with muscles, organs, and glands through these neurons.

Schwann cells: what are they?

Axonal conduction velocity increases due to myelin, which facilitates the transmission of electrical signals throughout the nervous system. For peripheral nervous system neurons to reproduce, Schwann cells are necessary. In addition to myelination, Schwann cells deliver nutrients and protect axons that lack myelin.

How does the Rannoye node work?

Some neurons have periodic gaps in their insulating sheath (myelin), which facilitate the rapid conduction of nerve impulses.

myelin sheath is composed of concentric layers of lipids, including cholesterol, cerebrosides, and phospholipids, separated by thin layers of proteins. As a result of this structural arrangement, insulation has a high resistance and a low electrical capacity. Despite this, the nodes of the node are not insulated at intervals, allowing impulses to jump from one node to another. 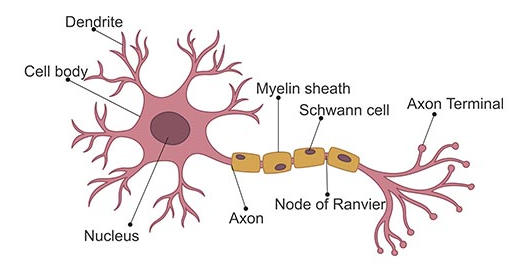 What is the function of neurons?

Chemical and electrical synapses can be triggered by action potentials. Neurons transmit electrical and chemical messages through synapses. A synapse consists of three parts: a presynaptic terminal, a synaptic cleft, and a postsynaptic terminal.

Neurotransmitters are chemical messengers released by neurons at chemical synapses. Molecular receptors on the postsynaptic terminal of a dendrite bind to these molecules across the synaptic cleft.

Your body cannot function without neurotransmitters. Their job is to transmit chemical signals (messages) from one nerve cell to another. A nerve cell, a muscle cell, or a gland can be the target cell.

Axon terminals contain neurotransmitters. Synaptic vesicles are thin-walled sacs that store synaptic peptides. Neurotransmitter molecules can be found in thousands in each vesicle.

Neurotransmitters bind to specific receptors on target cells. By binding to a target cell, the neurotransmitter causes an action or change, such as generating an electrical signal in another nerve cell, contracting muscles, or releasing hormones.

There are at least 100 neurotransmitters known to scientists, and many more are likely to be discovered in the future. Chemically, neurotransmitters can be classified into different types. Among the most well-known types are:

Neurotransmitter dysfunction: what causes it?

Research over the past century has increased our understanding of neurons, but there is still much to learn. Until recently, researchers believed that neurons were produced in the hippocampus of the brain in adults. Learning and memory are facilitated by the hippocampus. However, a study from 2018 found that the hippocampus produces fewer neurons after birth, and in adulthood, almost none are produced. Neurogenesis was considered an obstacle to treating diseases such as Alzheimer’s and Parkinson’s due to this discovery. It is both the result of damage to neurons and the result of their death that causes these diseases.

is still possible, however, to generate new neurons using neural stem cells. New neurons can be produced by neural stem cells. Scientists are still trying to find a way to use these stem cells to create specific types of neurons in the lab. By regenerating nerve cells, we can replace those that have been destroyed by aging, injury, and disease.

There are ongoing clinical trials

Fresh nerve cells are being tested in many clinical trials. Among these trials, one targets people who have suffered an ischemic stroke. Additionally, fluorescent probes were used to observe nerve cell activity in mice in real time in a 2019 study. Using this technology, we could map brain activity, discover problems that lead to neurological disorders, and advance artificial intelligence.

Neurons are the cells of the nervous system. There are three distinct parts to a cell: its body, its axon, and its dendrites. They use these parts to send and receive chemical and electrical signals. There are billions of neurons and thousands of different kinds, but they can be divided into three main groups based on function: motor neurons, sensory neurons, and interneurons.

Neurons and their role in certain brain diseases remain largely unknown. There are, however, a number of research projects and clinical trials underway to find answers to these questions.