Everything about pregnancy nutrition, If you are just about to become a mother and are pregnant, you will surely hear contradictory words that are difficult for you to distinguish right from wrong. Sometimes even these misconceptions disrupt the normal process of pregnancy.

Because your and your baby’s health is so important, we want to share the misconceptions that have been spread about pregnancy so that you can distinguish between right and wrong.

One of the misconceptions that some people have accepted is the adverse effects of consuming too many iron-rich foods during pregnancy. Women think that eating these iron-rich foods darkens the fetus’s skin in the womb, but this belief is entirely wrong. One of the essential nutrients that are very important for the health of the fetus and mother is the consumption of iron, and according to the needs of both during pregnancy, it should be used.

After pregnancy, the first question that comes to a pregnant woman’s mind is how to feed during pregnancy, how much food and nutrients are enough to meet the mother and fetus’s needs.

Regarding this nutrition, the misconception that has formed in people’s minds is that if this belief is not right and a pregnant woman does not need to eat as much as two people, the fetus weighs as much as one person. It meets the needs of the body, and if it is to make changes to the mother’s diet, she must have a balanced amount of food in her diet.

Pregnancy has been described as a miraculous period for pregnant women, so their nutrition will be compassionate during this period, especially for women who are very focused on losing weight during pregnancy, who should avoid high-calorie foods.

First of all, you need to know that the amount of calories depends on each pregnant woman’s physical activity and health status. That’s about 200-300 calories per day from the first trimester of pregnancy, but most obstetricians recommend that a pregnant woman should get about an extra 350 calories.

Finally, doctors believe that in the third trimester of pregnancy, all pregnant women should receive about 500 extra calories during the day.

It is clear that this amount of calories is not provided by itself, so these people must meet the body’s needs by consuming and consuming nutritious foods and extra calories.

The most common misconceptions about pregnancy nutrition:

Exercise is dangerous for pregnant women.

It is a misconception that many people believe that if a pregnant woman does balanced exercise, there is no danger and does not endanger the health of the fetus and herself, but if the expectant mother’s physical activity is excessive, not only It does not hurt but can cause irreversible side effects.

Significant help in proper exercise for pregnant women is that it keeps the metabolism active and prevents obesity.

Darkening of the fetal skin with iron intake

Another misconception that some people have is the adverse effects of consuming too many iron-rich foods during pregnancy because eating these iron-rich foods will darken the fetus’s skin in the womb. Still, you should know that this is entirely wrong because one of the essential nutrients that are very important for the health of the fetus and mother is the consumption of iron, and according to the needs of both during pregnancy, it should be used.

Harmful consumption of mango and papaya

Balanced consumption of any nutrient is very beneficial for everyone, especially pregnant women, and fruits are no exception to this rule. The fetus needs such nutrients for proper growth and healthy survival, so eating fruit is not harmful, but group elimination. The fruits of the pregnant mother’s diet are hazardous for the fetus’s health and growth.

It would help if you ate liver to prevent anemia.

Most people believe that anemia can be prevented if the liver is eaten by pregnant mothers, while the liver with too much vitamin A can pose a lot of risks to the developing fetus. And even if the liver is infected, it can lead to poisoning of pregnant women. This poisoning leads to premature birth, so eating the liver by doctors during pregnancy is prohibited.

Do not drink water to go to the bathroom.

Some pregnant women believe that if they do not drink water, frequent urination will be eliminated. Simultaneously, this is very dangerous because a pregnant woman’s body needs water to deliver nutrients and oxygen to the fetus.

If a pregnant woman’s power supply is disrupted, her body quickly loses water. It endangers the health of both, so we recommend that you drink plenty of water during pregnancy and go to the bathroom whenever you need to. Remember that not going to the toilet can cause irreversible complications such as a urinary tract infection.

You should know that this only applies to crustaceans. It should be noted that eating fish is allowed for pregnant women because eating some fatty fish has many benefits for everyone, especially pregnant women because they contain more omega-3. By consulting a specialist doctor, you can include various harmless fish in your daily diet during pregnancy. 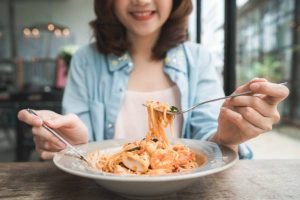 Eat as much as two pregnant women.

People make a common mistake people make about pregnant women is that they are often told to eat instead of two, but they should know that the fetus in the womb does not need as much food as the mother and only needs 300 calories. It should not be eaten as much as two people, not to mention that these misconceptions make pregnant women overweight and have difficulty moving in the last pregnancy stages.

The heavier the baby, the healthier it is

First of all, you should know that the minimum weight should be 2 kg and 500 g and the maximum weight should be 4 kg. On average, babies weigh 3 kilograms and 200 grams. Unfortunately, most families believe that an older baby is healthier than a normal-weight baby, so a misconception leads a pregnant woman to think that she is pregnant. Eat fatty and plump foods and rest too much, and eventually, in the last months, the mobility will be minimal and cause many problems. Note that a baby who weighs more than 4 kg disrupts expected delivery.

Introducing the most suitable foods for pregnancy nutrition:

In the continuation of this section, we have prepared a list of the most suitable foods for pregnant women to consume in their daily meals so that by including them in the diet, you can spend this sensitive period well and in perfect health.

In fact, as a pregnant woman, you need to make sure you have enough calories in your daily diet. So join us to get acquainted with the essential nutrients required by a pregnant woman:

In the early months of pregnancy, a pregnant woman needs more calcium for her body to ensure the growth of fetal organs and tissues in the uterus during these critical stages.

It is essential to make sure you get enough iron to prevent anemia and add vegetables to your diet. 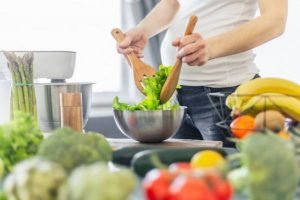 Fruits are a rich source of minerals and vitamins. Eating each of them meets the pregnant mother and fetus’s needs during pregnancy, so be sure to include bananas, grapes, apples, oranges, and other fruits that are good sources of vitamins in your diet.

When vegetables and fruits are eaten in their original form, they are an excellent option to add to pregnant women’s diet, because in this way, a beneficial high-fiber diet helps the mother and fetus.

It is interesting to know that this type of food during pregnancy leads to the female gastrointestinal tract’s proper functioning and prevents constipation problems during pregnancy.

We conclude that consuming the group of foods mentioned above is an excellent suggestion for a pregnant woman to adjust her meals in the best way during pregnancy.

And of course, the best thing for pregnant women is to consult a nutritionist and gynecologist to plan and create a healthy diet for pregnancy so that she and the fetus can use the calories they need.