Licorice is cultivated in many Mediterranean countries, especially Egypt and Syria, as well as East Asian and European countries, and it comes in many different types, each with its own characteristics. Since the licorice plant contains important compounds and nutrients, they were the first to use it for treating diseases and health issues. Sugary substances and mineral salts such as sodium, potassium, magnesium and phosphorus, as well as soapy substances and important volatile oils are the most important. The benefits of licorice for the skin

These are some of the most important aesthetic benefits of licorice for the skin:

As a natural antifungal, it treats many fungal skin conditions.
Various skin diseases are reduced by it. Psoriasis, eczema, in addition to rash, it also reduces the symptoms associated with these diseases, including redness and itching.
Because it keeps pores clean, it protects the skin from many problems, including acne and pimples.
Cold sores, which usually affect the lips, are relieved by it.
As it contains many ingredients and compounds that brighten and unify the skin tone, it reduces dark spots and blemishes.
Because of its antiseptic properties, it reduces the severity of infections that affect the skin.

The following steps can be taken to lower blood cholesterol levels:
Patients with high cholesterol and hypercholesterolemia may benefit from eating licorice root extract, as this plant is antioxidant-rich. According to a 2002 study published in the journal Nutrition, it reduces cardiovascular risk.

Spasm reduction:
Dialysis patients may benefit from taking herbs containing licorice extract to relieve skeletal muscle spasms. Muscle spasms are a common symptom for these patients, according to a study published in the American Journal of Chinese Medicine in 2003. 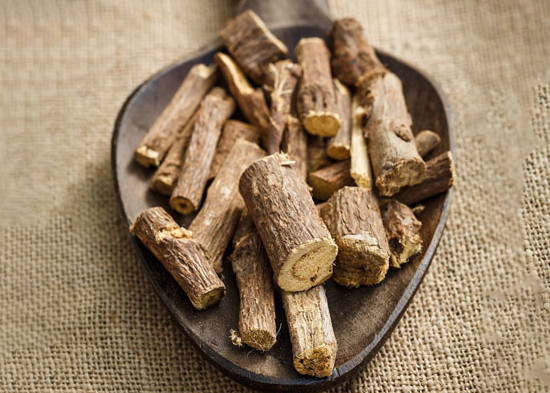 Benefits of licorice for the stomach include:
Research has shown that licorice extract may help reduce Helicobacter pylori bacteria, the bacteria that causes stomach ulcers in some people, according to a study published in the Brazilian Journal of Infectious Diseases. The use of licorice and treatment prescribed by a doctor to eliminate the bacteria Helicobacter pylori has been found to reduce the bacteria better in people with stomach ulcers, according to a study published in 2016.

The benefits of licorice for the liver include:
Taking licorice root extract has been shown to lower levels of liver enzymes, which are a sign of non-alcoholic fatty liver disease. . Though this study is from 2012, more research is needed in order to prove this.

The benefits of licorice for the colon include:
Irritable bowel syndrome symptoms may be relieved by licorice. People suffering from persistent constipation may benefit from eating an herb blend containing licorice, according to a 2006 study published in the Journal of Complementary and Alternative Medicine. In the case of licorice, more studies are needed to prove this benefit.

Benefits of licorice for diabetics include:
Licorice contains compounds that can lower blood sugar levels and fight inflammation. For diabetic patients, licorice root can also be used as a dietary sweetener, whereas non-diabetic mice did not experience any changes in blood sugar levels.

Women can benefit from licorice in the following ways:
Women use licorice root to relieve menstrual cramps, and it has been shown to contain compounds known as phytoestrogens, which are compounds that may help relieve symptoms associated with menopause, such as hot flashes. It appears that eating licorice may significantly reduce the duration of hot flashes, similar to how estrogen reduces them, according to a 2014 study.

Side effects of licorice include:
When eaten in moderate amounts, licorice is considered safe for most people. However, when consumed in large quantities, such as therapeutic doses, it is dangerous. For more than four weeks or for a long time in smaller amounts. During pregnancy, eating more than 250 grams of licorice per week can increase the risk of premature birth or miscarriage. Licorice is not known to be safe for breastfeeding women. It is therefore recommended to avoid its use during breastfeeding.

People who use it should be careful to avoid its side effects, which include the following:

Those with congestive heart failure: eating it leads to water retention in the body, which may aggravate their condition and cause irregular heartbeats. Therefore, heart patients should avoid using it.

It may worsen hormone-sensitive conditions such as breast cancer, uterine cancer, ovarian cancer, or uterine fibroids, as it may act as estrogen in the body. As it contains hormones like estrogen, it should be avoided in this situation.

A decrease in potassium levels in the blood caused by eating it may worsen the condition of people with hypertension.

Those with kidney disease: Overuse may worsen their condition.

It is recommended to avoid its use at least two weeks before surgery for people who will undergo surgery: its use may cause disturbances in blood pressure control.

It may worsen erectile dysfunction in some men, as it lowers testosterone levels.

Interactions between drugs:
It is recommended not to take drugs that have not been prescribed by a doctor if the extract is taken on a doctor’s prescription.

What are the benefits of licorice for pregnant women?
Pregnant women should avoid eating this because it may increase the risk of premature birth or miscarriage.

Can licorice damage the kidneys?
It is possible for kidney patients to suffer from several health problems by eating only five grams of the plant a day, such as high blood pressure, low potassium levels, general weakness and paralysis, and high consumption of the plant may aggravate kidney disease. Patients with kidney disease should avoid using it.

Does licorice help you lose weight?
Its benefits for weight gain and whether it causes weight gain or loss are frequently asked questions. According to a study published in the Journal of Endocrine Research in 2014, eating 3.5 grams per day may reduce body fat mass, but it is important not to go overboard.

In Ramadan, what are its properties?
There is a higher consumption of such natural drinks in hot areas, especially during Ramadan. During Ramadan, it is generally recommended to drink enough fluids to prevent dehydration, so preparing it is recommended to get its benefits of reducing thirst. As high temperatures contribute to increased sweating during the fasting period, it is necessary to drink 10 glasses of fluid per day to make up for lost fluids.