One of the most beautiful examples of Safavid period architecture is the Ali Qapu Palace in Naqsh Jahan Square in Isfahan. Many domestic and foreign tourists have been attracted to the Ali Qapu mansion because of its outstanding architecture and impressive decorations by famous Iranian artists. Among the most important parts of Ali Qapu Palace are the entrance, luxurious halls, the music hall on the top floor, as well as outstanding works of art throughout. Ali Qapu Palace’s main foundations are built on wood, which adds to the architectural charm of the building.

Ali Qapu Palace is one of the most attractive attractions in Isfahan. Visit the Ali Qapo mansion and learn about the building of the palace. The purpose of this article is to introduce the Ali Qapu Palace of Isfahan and its different parts.

Isfahan’s Ali Qapu Palace is one of the most famous historical buildings from the Safavid era. In Isfahan, Ali Qapu Palace is located in front of Sheikh Lotfollah Mosque on the west side of Naqsh Jahan square. The Ali Qapu Palace has an area of 1800 square meters, six floors, and a height of 38 meters. With its beautiful architecture based on wood, Ali Qapu was considered one of the largest and most magnificent buildings in its time since it stands out from the other buildings around the square.

Naqsh Jahan Square’s entrance gate was the entrance gate of all the royal buildings during the Safavid period. Aali Qapu Palace was built by Shah Abbas I of Safavi to demonstrate his power and glory. In this palace, important government meetings were held, foreign guests were welcomed, and government ceremonies were held. Shah Abbas and his entourage used the balcony of this mansion to watch polo and horse riding matches in Naqsh Jahan square while resting.

It was not possible for everyone to pass through the entrance door of Ali Qapu Mansion during the time of Shah Abbas . In Isfahan’s Naqsh Jahan Square, this 6-story building attracts many tourists from the distant past until today.

A narrow staircase leads from the ground floor to the upper floors of Ali Qapu Palace, which is known as the tallest palace of the Safavid era. Due to their height, these stairs are a bit difficult to climb. Naqsh Jahan Square can be enjoyed from above a beautiful porch with 20-meter-high wooden columns. In this porch of the Sheikh Lotfollah Mosque, on your left, you can see the entrance to Qaisaria, and on your right, the Shah Mosque. In Naqsh Jahan Square, Isfahan, Ali Qapu Mansion is one of the most interesting historical buildings. 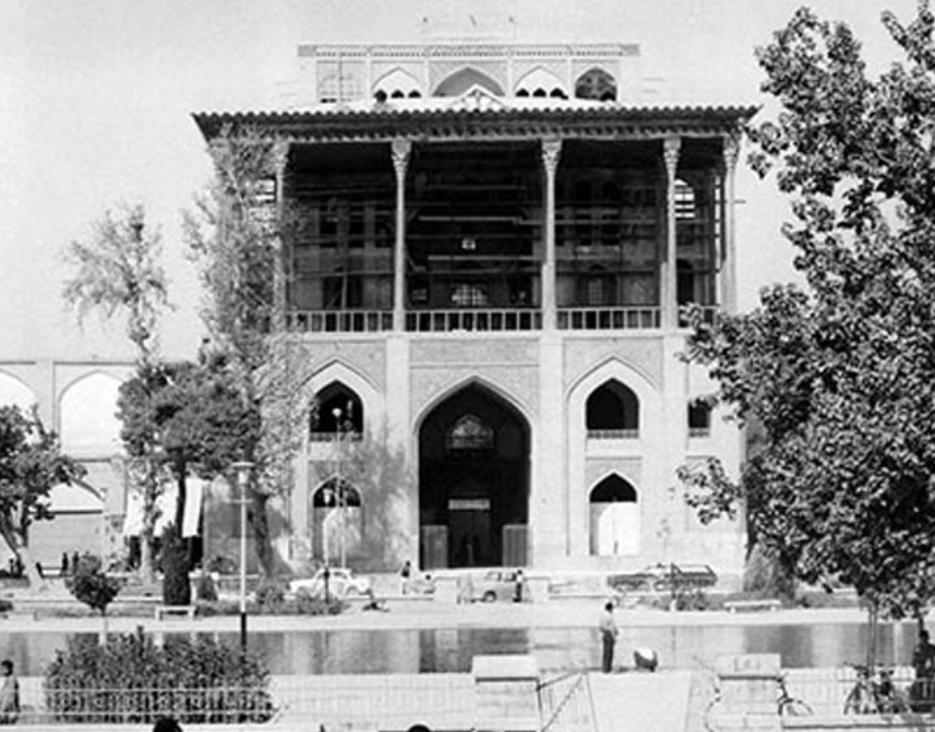 It dates back to the Safavid era in Iran, when Isfahan was the capital.

Shah Abbas I, one of Iran’s most powerful kings, built the Ali Qapu Mansion around 1054 AH (between 971 and 977 AH). Ali Qapu Palace was completed after Shah Abbas I’s death, and Shah Safavi received ambassadors and dignitaries there. Shah Abbas I, Shah Abbas II, and Shah Sultan Hussein constructed and decorated the Ali Qapu building. Nearly 100 years have passed since the construction stages of the building were intermittent. Originally built during the reigns of Shah Abbas I and II, the building was restored and decorated during the reign of Shah Sultan Hossein.

In the interior decorations of Ali Qapu mansion, there are prominent works of calligraphy and miniatures from the era after Shah Abbas I, showing the completion of Qapu Palace. Shah Abbas commissioned the most prominent Iranian architects to design the architecture of the Aali Qapu mansion, which was to serve as a “government palace” for him. Following the transfer of the capital from Qazvin to Isfahan, these measures were taken.

In the first stage of Ali Qapu’s construction, this building served only to establish a communication route between Naqsh Jahan Garden and other nearby palaces, and only the king and courtiers could use it for ceremonial events, to welcome foreign guests, and to carry out administrative tasks. 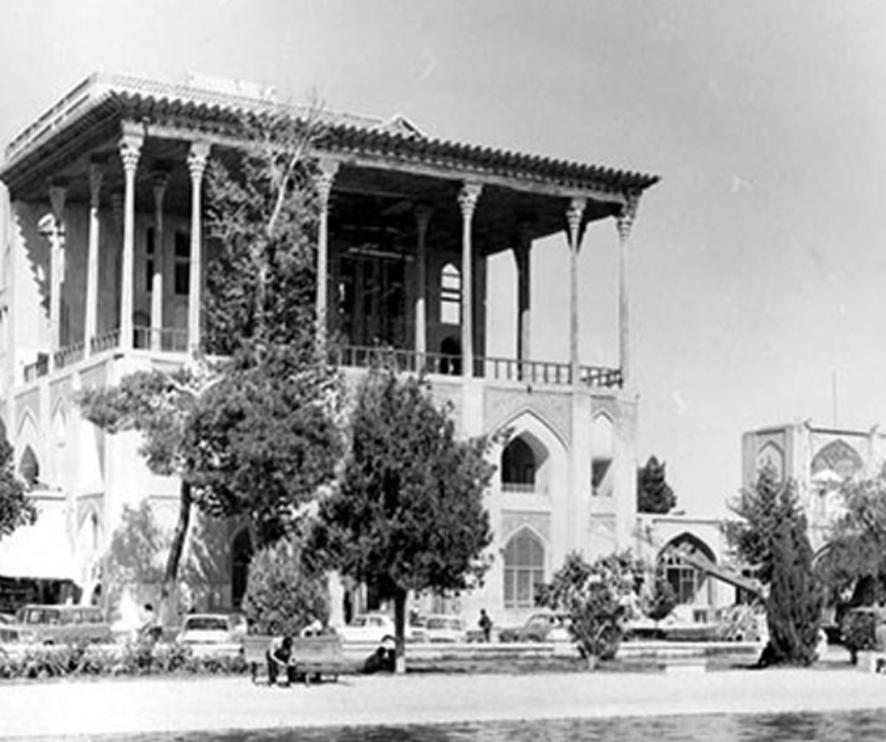 With the expansion of the city of Isfahan and the increase in population living in this city and migration from surrounding settlements to the capital, the importance of the seat of government also increased, so the Ali Qapu mansion was constructed with more floors for this purpose. The ceiling was decorated with large paintings and additional columns were covered with mirrors. Shah Abbas II added the first decorative covering to the porch walls, while Shah Sultan Hussein added the second. Safavid kings and their guests watched polo games, Chiragani, fireworks, and field shows from the top floor of Aali Qapu Palace. Approximately 480 square meters of this pillared porch are covered in wooden beams, which contribute to the building’s strength.

Afterwards, they decided to increase the amenities of Ali Qapu Palace for the accommodation of guests, and a music hall was also added to the last floor of Ali Qapu Palace. There are beautiful decorations inside the music hall, which is architecturally different from other parts of the palace. In order to provide more space for watching events within the square, the porch overlooking the garden was expanded after the changes to the building. Therefore, the porch was moved seven meters from the bazaar shops and then the mansion entrance. Additionally, they expanded to accommodate guests and ceremonial parades.

Finally, they installed 18 pillars and a wooden roof on the palace porch. This porch was accessed by a long, narrow staircase. To transfer water to the top of Ali Qapu Palace, a copper basin was placed in the porch. In its time, the Aali Qapu building was considered one of the most complete palaces in the kingdom.

Various parts of Ali Qapo Palace have been restored in recent years, and scaffolding was installed in 2004 to strengthen the building’s strength, clean the facade, and rebuild the damaged areas. After 12 years, the scaffolding was removed from the Ali Qapu building, but the work of restoring the interior decorations and other parts continues. 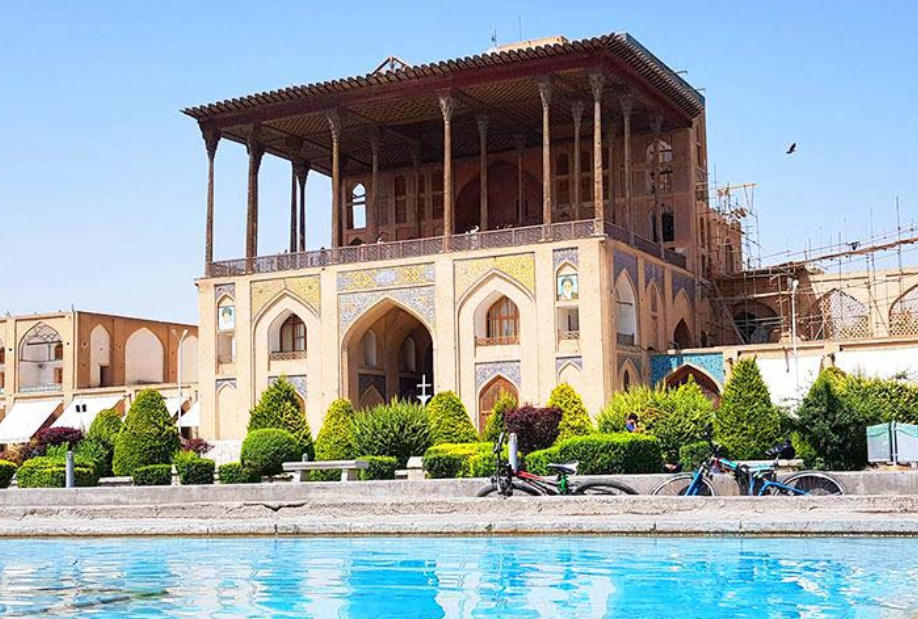 What is the location of Aali Qapu Palace?

The large porch with tall wooden columns on the facade of the Ali Qapu building immediately catches the eye. Ali Qapu Palace has a special design that makes the number of floors look different depending on the direction of the facade. Naqsh Jahan square can be seen from this two-story building. On both sides of Ali Qapu, you will see three floors, and from the back, five floors; however, Ali Qapu mansion actually has six floors. The plan design of Ali Qapu divides the mansion into two parts, the palace entrance and the main building.

There is a spiral staircase connecting the upper floors of the palace. In the upper floors, there are more rooms and large halls, and the highest room on the sixth floor is specially designed as a music studio. As a result of the design of this room, music used to be heard throughout the building in the past. Ali Qapu Palace was designed in an elaborate and principled way considering the time of its construction, and the designers’ skill can be seen in the design of different parts of the building.

Two stone platforms stand on either side of the entrance, from the inside. This part, which is between the entrance and the main building, has gabled arches, which are seen in smaller forms on the other floors of the mansion. It has an area of 64 square meters and a height of 11 meters, which is one of the most beautiful Slimi and Khatai patterns. When a person is in each corner of this space and says a word, the person in the symmetrical corner will hear the sound clearly and loudly. Upon entering the space, viewers are immediately drawn to the acoustic features of the space.

There are two spiral staircases on either side of the ground floor that lead to the top floor with 94 steps. King and his family used the zigzag staircase on this floor.

In total, there are six floors above the palace, each with two parts. Each side of the building appears to have a different number of floors. A view from the east side shows two floors, a view from the west side shows five floors, and a view from the special staircase for royal meetings shows seven floors. Previously, Ali Qapu’s porch had a copper basin from which water gushed, located on the third floor, 28 meters above the ground. In the palace, there are large rooms in the center and smaller rooms around it.

Ali Qapu Palace has a 63 square meter music hall designed in the shape of a cross on the top floor. As a result of its architecture, the sound of music from this hall can be heard throughout the palace. The music hall consists of three rooms, two of which are larger and one smaller. Today, it remains one of the most beautiful parts of Ali Qapu Palace. According to a famous European painter, this room’s stucco decoration is as follows: 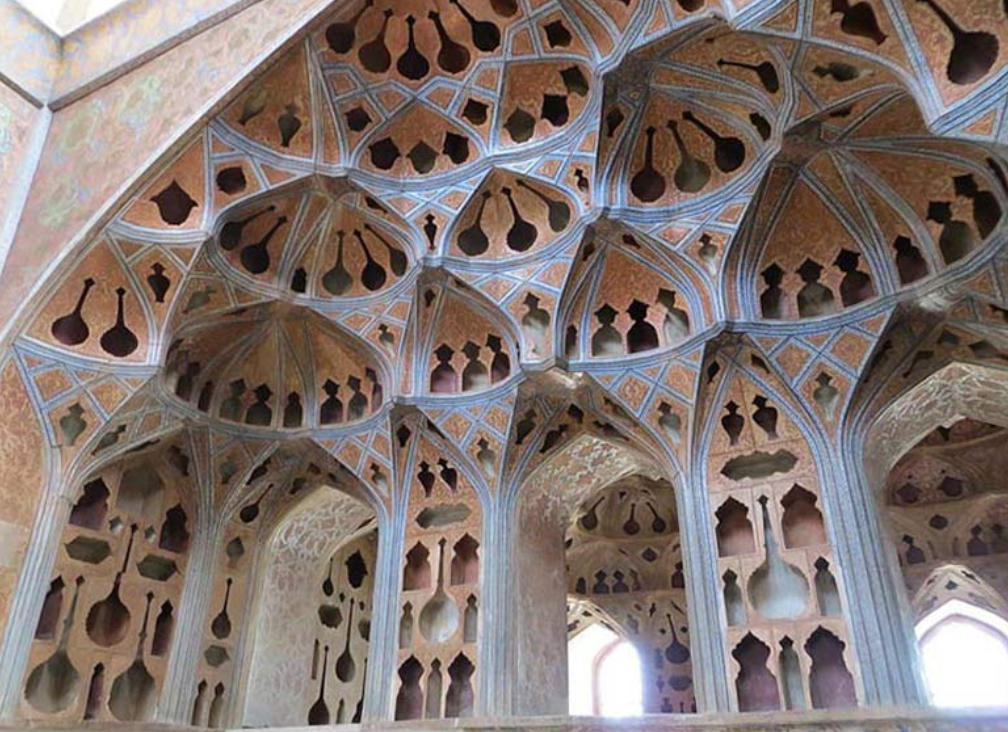 The interior decorations of a mansion are considered its most interesting architectural features. From the entrance of Ali Qapu mansion to the highest part of the music hall, the building has been decorated with the art of Iranian artists. You can see traces of plaster works and beautiful paintings on each floor of the Ali Qapu mansion.

On the third floor of Ali Qapu Palace were beautiful wooden columns decorated with mirror work, and the porch ceiling was also decorated with wooden reliefs and artistic carvings. Behind the porch, the outstanding paintings on the walls enhance the beauty of the building. Today, there is no news of mirror work and many parts of the paintings have been destroyed. 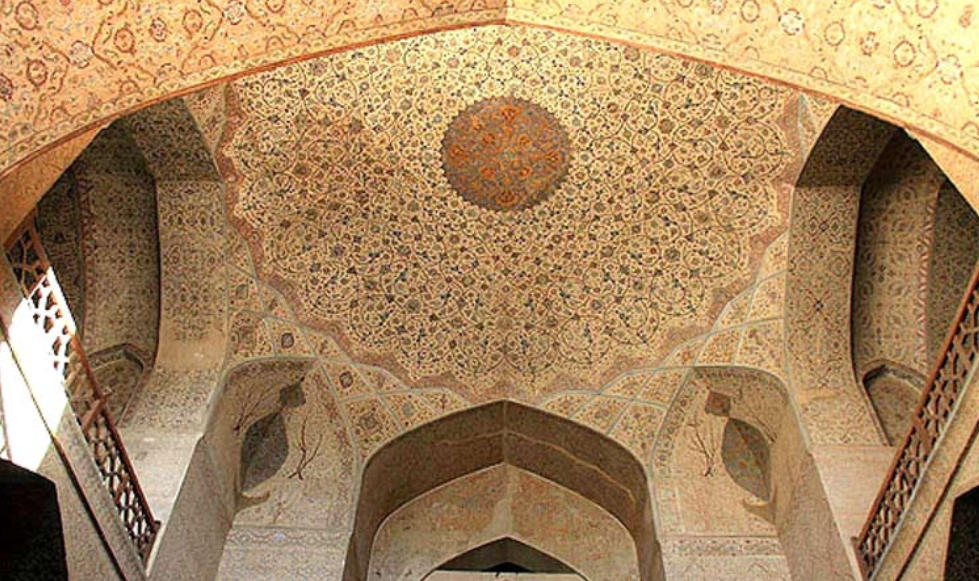 There are also prominent paintings by the Safavid artist Reza Abbasi in the interior decorations. Some of these works have been seriously damaged, but these damages do not diminish their value.

The interior of Ali Qapu Palace features patterned carpets as another feature. Moqrans decorations, a feature of Islamic historical buildings, are abundant in this palace. 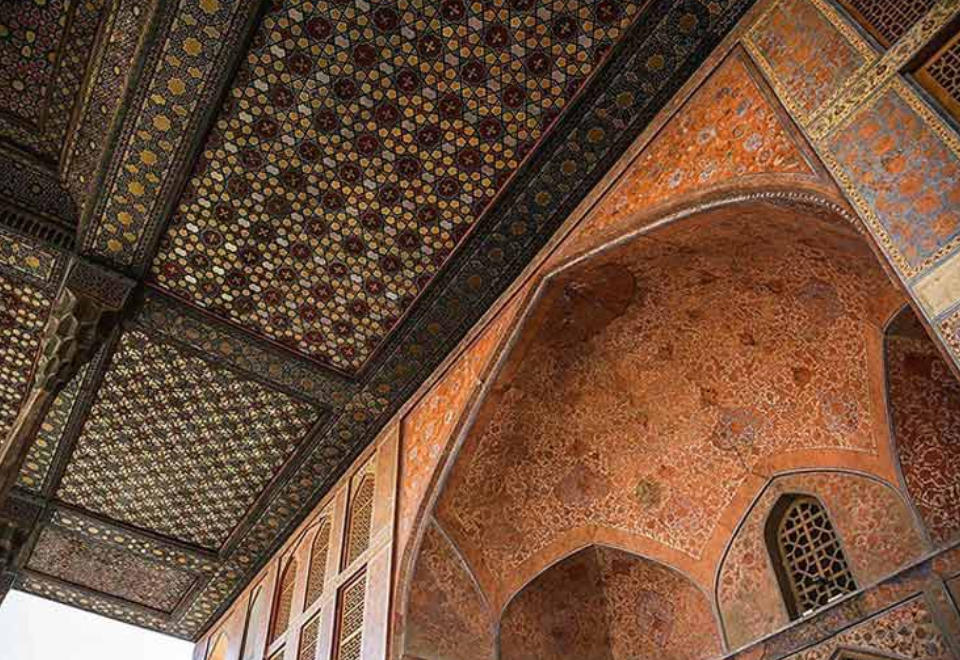 Safavid kings were interested in painting and painting, and many of the works left in Ali Qapu Palace are among the most important historical works of art in Isfahan. In the Ali Qapu Palace wall paintings, the name of the artist and the date of registration are not mentioned, making expert identification difficult. Ali Qapo mansion features beautiful and miniature pictures of traditional Iranian art, as well as modern and western paintings. There are paintings by Reza Abbasi and similar styles on the first, second, fourth, and fifth floors, as well as modern paintings on the third and sixth floors. Paintings in the palace are protected by a stabilizing solution.

Gilding can also be seen on the walls, arches, and ceilings of Ali Qapu mansion. Following the placement of the porcelain layer on the desired parts, the part is plated with gold so that the grooves are filled with gold water, which makes the effect twice as beautiful. 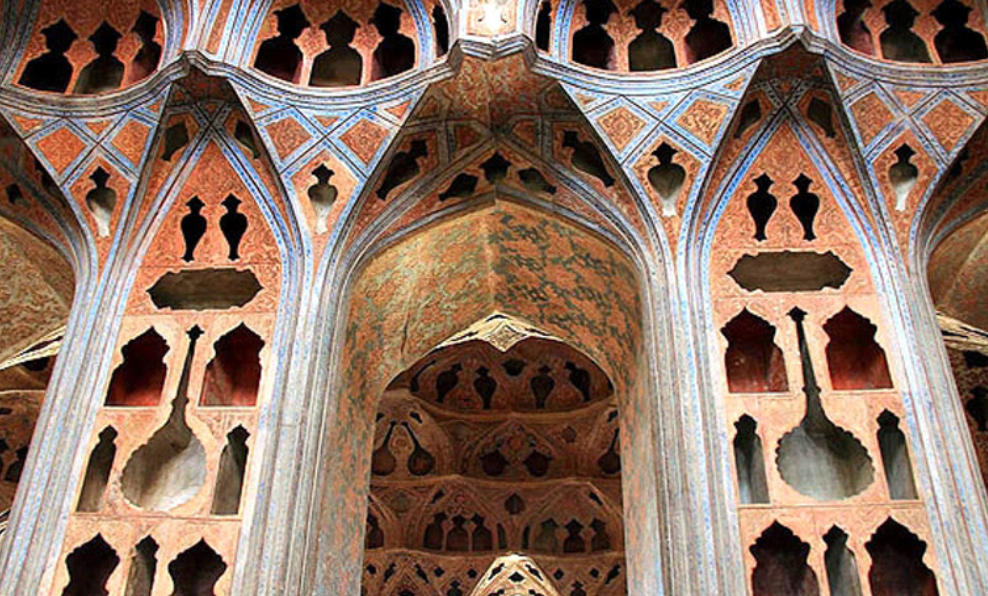 It is mentioned in the inscriptions and writings left in the Ali Qapu mansion that parts of the building were restored during the reign of Shah Sultan Hossein. As a result of many damages, only words and stanzas of the poems can be read on the walls of the palace.

This historical building is decorated with paintings of flowers and plants, foliage, beasts and birds, and plasterwork in the form of cups and saucers embedded in the arches and walls. It was not intended to place cups and dishes in the stucco shapes in this part of the building because the type of this work is very delicate and will break with the slightest touch. Additionally to their decorative aspect, these forms reflect natural sounds and tones. The beautiful, diverse and extensive decorations of the Ali Qapo mansion have drawn artists from all over the world for many years.