Potatoes are one of the most widely consumed foods globally and are rich in potassium, fiber, and carbohydrates. Potatoes can spoil and become unusable very quickly if not properly stored. Some people use the freezing method to store potatoes for a long time, but can potatoes be frozen raw? How to make boiled or fried potatoes? How to choose fresh and healthy potatoes?

Avoid picking damaged potatoes as they spoil faster. Potatoes may be damaged during harvest or transportation.

Avoid buying sprouted potatoes; sprouts are one of the first signs of spoiled potatoes.

Can raw potatoes be frozen? 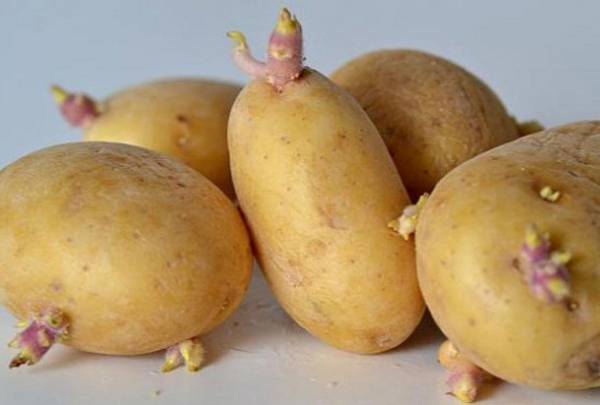 Also, raw potatoes change color and brown when exposed to cold freezer air, and the water inside the potato expands when exposed to frost, forming crystals that break down cell wall structures, resulting in a paste. It becomes a potato.

Can frozen potatoes be frozen?

Baked potatoes can be frozen because when the potatoes are fully or partially cooked, the enzymes that cause the potatoes to be brown are inactive, and the potatoes no longer change color.

Put the potatoes in the freezer, put them in a plastic bag, and squeeze out all the air.

Frozen and cooked potatoes remain healthy for up to a year without any change in quality.

When you want to eat potatoes, put them in the refrigerator before reheating before thawing. Can fries be frozen?

You can not fry the potatoes and freeze them in a fried way because the potatoes’ taste has changed, but you can put the potatoes in the semi-prepared form in the freezer and fry them after taking them out of the freezer.

How to properly prepare frozen potatoes:

First, wash and peel the potatoes.

Then chop the potatoes.

Pour the potatoes into boiling water and boil for three minutes.

Allow the potatoes to dry or dry them with a clean cloth.

Pour the semi-prepared potatoes in the plastic freezer and aerate, then place them in the freezer.

Pour the potatoes into the hot oil while frozen (the slices should be separated) and fry.

If you have peeled and sliced ​​potatoes and you want to fry them but you can not fry them at the same time for any reason, put the chopped potatoes in water (water should cover the potatoes) and that Store at cold temperatures to prevent discoloration. If the potatoes stay in the water for more than 24 hours, they absorb a lot of water and become tasteless, so fry the potatoes sooner.

How to store potatoes for a long time?

Store raw potatoes at temperatures between 43-50 degrees Fahrenheit (6-10 degrees Celsius) and in storage, basement, and garage. This temperature range is slightly warmer than the refrigerator. Storing potatoes in a cool place prevents the buds from forming on the skin, increases their shelf life, and preserves many vitamin C in them.

You can store the potatoes you bought for two weeks in a small, dark cabinet or bath to thicken the potato’s skin and eliminate any minor damage during harvest and reduce the risk of rot during storage.

Keep potatoes away from light as sunlight or fluorescent light can cause chlorophyll to form in the potato’s skin.

Potatoes need airflow to prevent moisture from accumulating and spoiling, so place the potatoes in an open container or paper bag so that air can flow freely.

If you keep the potatoes dry, they will last longer. Washing increases moisture and furthers the growth of fungi and bacteria. Wash the potatoes just before use.

If you pay attention to the above points, you can store your purchased potatoes for four months.

A full and detailed review of the properties of sweet potatoes: 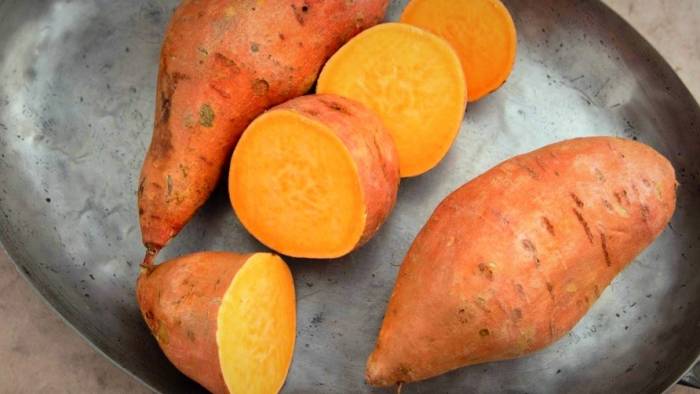 Purple This plant is useful are very tasty and even delicious if eaten hot. Some people still think that purple sweet potato is a “rural” food or the villagers’ food. Nowadays, sweet purple potatoes can be used as a traditional snack and become more modern dishes such as sweet purple potato pudding, purple rice, and brown sweet potato brown.

Vitamins and minerals in sweet potatoes:

The content of lysine, magnesium, manganese, and potassium in purple This plant is useful was 20%. In the case of anthocyanins or purple dye; The purple color varies between cassava plants. But it varies from 20 mg per 100 g to 600 mg per 100 g of wet weight. (Important Benefits Of Vitamin E For Skin, Hair, And Health)

This plant is useful are rich in vitamin B6. Vitamin B6 takes care of the body’s metabolism, strengthens the immune system, affects enzymatic activity, hormonal balance, and maintains liver function. People with vitamin B6 deficiency are very irritated and confused. As you have already read about the side effects of vitamin B deficiency on the site, worse than that, they also suffer from anemia, dementia, and Alzheimer’s disease. Vitamin B6 also cares for the nervous system, and people with deficiencies are known to have psychiatric disorders such as seizures and migraines.

Sweet potatoes are a rich source of ascorbic acid, known as vitamin C, and are very useful for maintaining our body’s gastrointestinal tract’s smoky movements. This movement is the prelude to anything that enters our digestive tract through the oral cavity. Vitamin C deficiency is associated with people who tend to vomit and constipation. Vitamin C is also used to treat scurvy. It also minimizes the aggravation of cold symptoms but has no therapeutic benefits.

Sweet potatoes are a rich source of vitamin D, which is very important for the deposition and storage of calcium in our body. Vitamin D deficiency causes a decrease in bone density, which can be assessed through a bone marrow test. It also acts as a catalyst in cancer prevention, type 1 diabetes, and multiple sclerosis. Sufficient vitamin D is also needed to absorb phosphorus. This plant is useful are essential for people who live at least in the sun because they are the leading vitamin D synthesis source in our body.

This plant is useful have enough iron to make hemoglobin and build red blood cells. Red blood cells maintain a healthy immune system by protecting against pathogens that attack our body. Hemoglobin is the primary carrier of oxygen in the body. Iron also moves with oxygen and is the leading cause of red blood cells. Iron deficiency can lead to anemia. 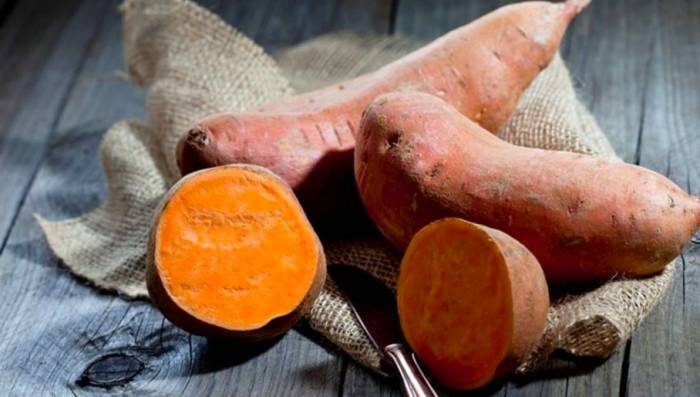 Sweet potatoes contain large amounts of magnesium, which maintains the average heart rate in the human body. It also helps regulate blood sugar and is associated with energy metabolism and protein synthesis. It is the fourth most abundant mineral in the human body and plays an essential role as an anti-stress element and acts as a sedative. It also plays a significant role in more than 300 enzymatic reactions.

This plant is useful are rich in potassium, regulating heart rate, electrolyte function, and the nervous system. It is the third most abundant mineral found in the human body. It is a vital element—people with potassium deficiency experience a sudden period of palpitations, anemia, and headaches. Potassium has been shown to stimulate neural activity. Potassium acts as a vasodilator, causing blood vessels to relax when found in reasonable amounts. This mineral stabilizes blood sugar and reduces muscle disorders such as cramps. This plant is useful have the right combination of low sodium and high potassium, which is useful for maintaining healthy blood pressure.

This plant is useful contain a nutrient called choline, a versatile element for countless aspects such as sleep, learning, memory, and muscle movement, and is very useful in reducing inflammation. It is also useful for fat absorption. Also, this nutrient is involved in the structure of the cell membrane and helps transmit nerve impulses. Choline deficiency can lead to non-alcoholic fatty liver disease.

Although sweet potatoes are known for their sweetness, they are never responsible for the blood sugar attack, which is found in people on a high-calorie diet after a long break in eating. This plant has a glucose index of about 17 times, while the common potato that is known to be responsible for blood sugar attack has a blood sugar index of 29. People with high blood sugar seem to have poor eyesight and are less focused on one task. Sweet potatoes are high in fat, which reduces the body’s ability to absorb sugar. This does not increase the thirst of people who ate a sweet potato after a long distance.