At least 46 bodies believed to be immigrants were found in a trailer on the outskirts of San Antonio, Texas.

According to a fire official, 16 people, including four children, were taken to hospitals.

In addition to being 250 kilometers from the US border with Mexico, San Antonio is one of the main transit routes for human traffickers. 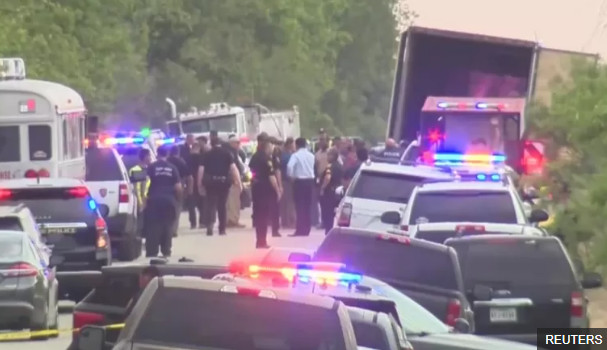 There have been several cases of heat stroke.

Trailers are commonly used by traffickers to transport asylum seekers who arrive without identification.

Social media posts show a large number of police officers and emergency equipment around the trailer.

Ron Nyrenberg, mayor of San Antonio, said that these people had families … and probably wanted to improve their lives. “This is a horrendous human tragedy.”

The investigation has been turned over to federal agents, and three people have been arrested, according to San Antonio Police Chief William McManus.

Firefighters encountered a trailer with a corpse lying outside and several corpses inside the cargo compartment.

The trailer did not have an air conditioner that worked and there was no water inside.

Human traffickers often meet undocumented migrants in remote areas after they cross the border and transport them by truck.

According to KSV, the vehicle was spotted along a railroad track southwest of San Antonio.

Mexican Foreign Minister Marcelo Ebrard said consular officials were on their way to the scene, but added that the victims’ nationalities were still unknown.

The Texas governor blamed US President Joe Biden and said it was due to his “deadly open border policies.”

The issue of immigration has been politically contentious in the United States. Unprecedented numbers of undocumented immigrants were arrested in Mexico last year. Many traveled on unsafe routes.